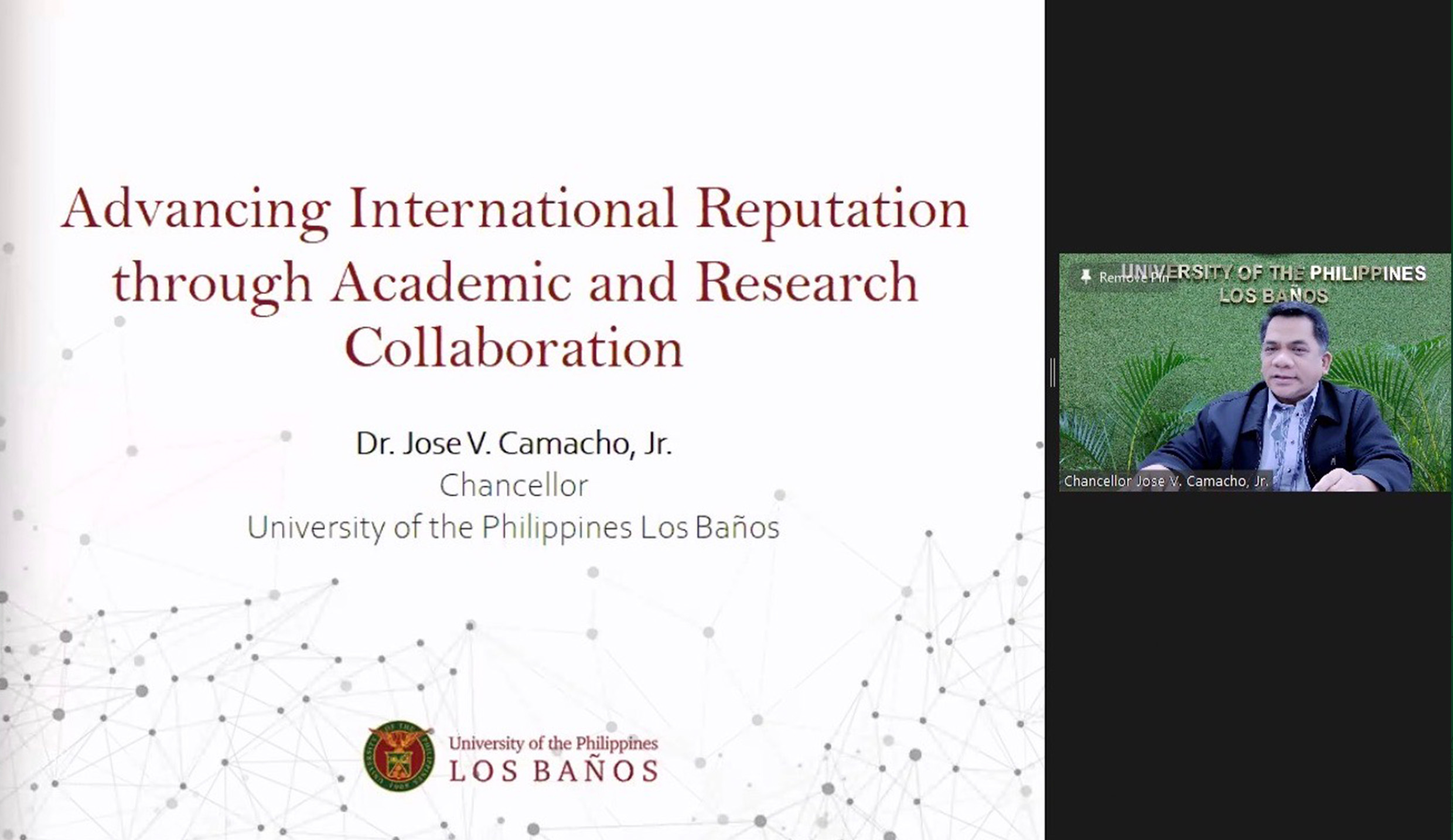 “A world-class university should have ‘superior outputs’ – and these outputs should be evident and legitimate,” said Chancellor Jose V. Camacho, Jr., as he explained to the management team of Tarlac Agricultural University (TAU) the concept of international reputation among higher education institutions (HEIs).

Chancellor Camacho served as one of the resource persons during TAU’s Annual Performance Review and Strategic Planning Workshop on Jan. 21, which was held virtually.

The said outputs, Chancellor Camacho explained, in reference to a 2009 publication of the World Bank, come in the form of well-qualified graduates, leading-edge researches that are published in reputable journals, and innovations.

He shared to the virtual workshop participants how UPLB has maintained its international academic partnerships and scholarly productivity, which have contributed to UP’s performance in recent world university rankings (WUR).

In the 2021 Times Higher Education WUR, UP remained in the Top 500 universities around the world and placed 5th in Southeast Asia. In the 2021 Quacquarelli Symonds WUR, UP placed 69th among HEIs in Asia.

“Academic and research collaboration are among the foundations of UP’s consistent placements in these prestigious university rankings. These collaborations have led to research projects, publications, and different forms of academic undertakings,” Chancellor Camacho said.

He encouraged the Camiling town-based TAU to maximize its existing local linkages and to start expanding its network in Southeast Asia to elevate its academic and research partnerships and productivity.

He also emphasized to TAU, which was established in 1945 and was previously known as the Tarlac College of Agriculture, the value of investing in infrastructure and human capital in the university’s quest to establish its international reputation.

“Avail of the many scholarship grants that the Philippine government provides – such as those from the Commission on Higher Education (CHED) and the Department of Science and Technology,” Chancellor Camacho, an expert in human resource economics, continued.

In his response, Dr. Max Guillermo, university president of TAU, expressed his intent to collaborate with UPLB in future endeavors. Among these are the prospective offering of UPLB’s off-campus programs in TAU on the latter’s niche areas in agricultural sciences.

UPLB has been holding off-campus graduate classes in various HEIs in the Philippines. In his term as dean of the UPLB Graduate School from 2012 to 2020, Chancellor Camacho spearheaded the offering of 11 graduate programs in various institutions in the country via off-campus mode.

Chancellor Camacho has also been serving as chair of the Technical Working Group on Graduate Education of CHED since Feb. 2018. (Mark Jayson E. Gloria)