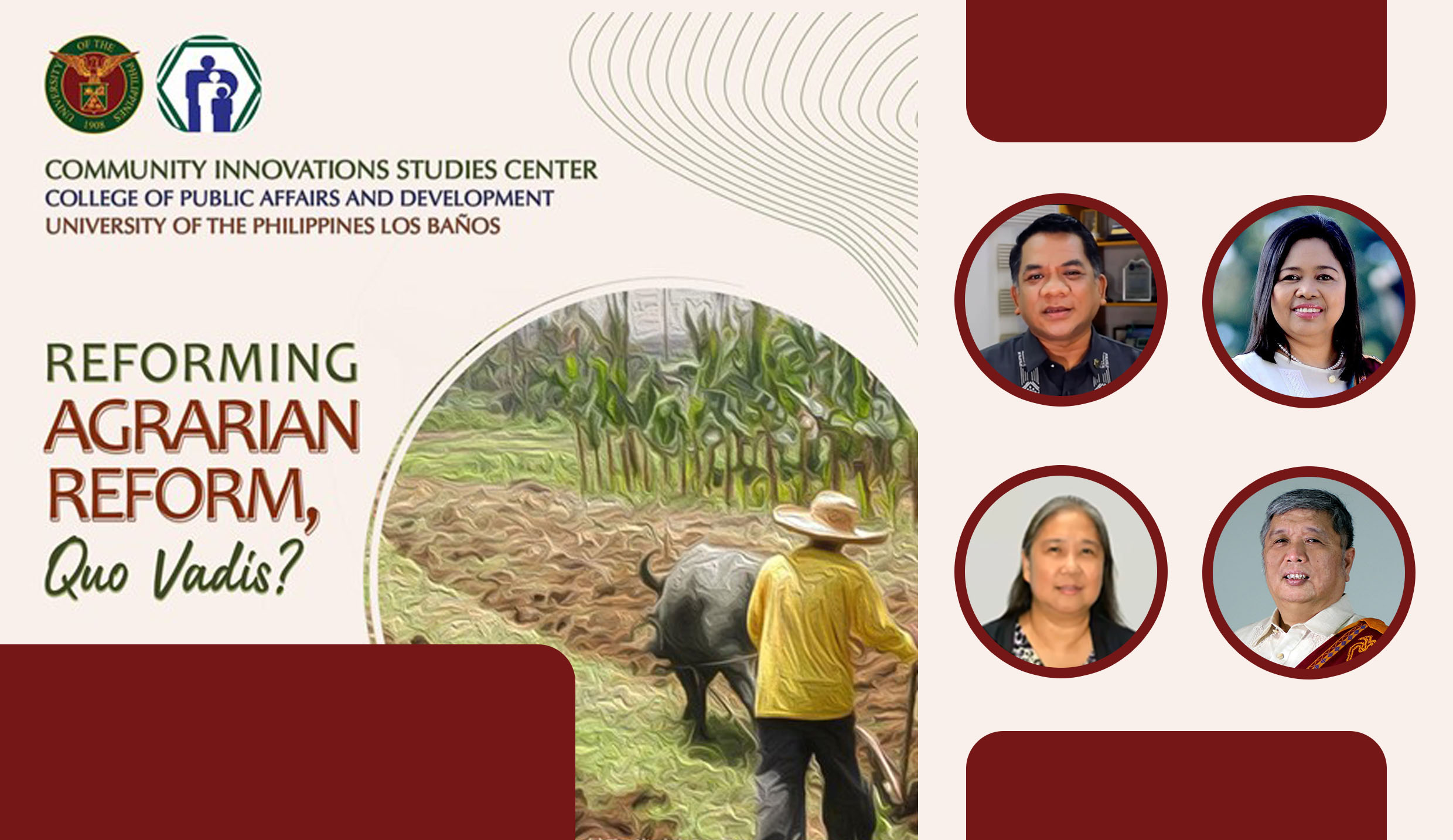 The agrarian reform program in the Philippines has been extended several times, which begs the question: where is it heading now?

Marking the 33rd anniversary of the Comprehensive Agrarian Reform Program, the Community Innovations Studies Center (CISC) of the College of Public Affairs and Development (CPAf) hosted a webinar on Oct. 21 that tackled the current state of agrarian reform in the Philippines and ways forward.

Agrarian reform in the Philippines has an extensive history manifested by unsteadiness and irregularities in its implementation.

Following the People Power Revolution in 1986, the Comprehensive Agrarian Reform Law (CARL) was passed with much expectation for change and democracy.

For the past and present administrations, this program focused on poverty reduction and development.

“Seeing the long history of agrarian reform policies in the country with focus on its implementation and current state is very crucial to be able to learn the lessons and continue the work done by our agrarian reform advocates,” UPLB Chancellor Jose V. Camacho Jr. said in his opening remarks.

He also encouraged the participants to assess, understand the current state of Philippine agrarian reform, and anticipate and prepare for what will come next.

“This is so when we are asked the question, quo vadis, or where are you going, our answer can be to a brighter and better future,” he said.

Former CISC director,  Dr. Josefina T. Dizon, steered the discussion to how the current CISC evolved from the Agrarian Reform Institute (ARI) during the Marcos regime in 1970, to its reorganization to the UP system in 1972, then to the Institute of Agrarian and Rurban Development Studies (IARDS) in 1998 when CPAf was established, and then to the present CISC.

She also talked about the recent projects of CISC such as the Agrarian Reform Infrastructure Support Project (ARISP), Organization Evaluation and Enterprise-Needs Assessment and Design Assessment (OE-NADA), and Agricultural Extension Services (AES) for agrarian reform beneficiaries organizations or ARBOs.

Sharing her insights as one of the keynote speakers, CISC Dir. Blanquita R. Pantoja emphasized the importance of looking back to the accomplishments, problems, and issues of CARP.

Secondary data on the land acquisition and distribution target that were presented showed that the share of private agricultural lands in actual accomplishment (56%) is much lower than the target (69%).

“Based on data backed by our research projects, the missed targets were due to difficulties encountered in the implementation, too comprehensive coverage of the programs, and the lack of accurate data,” Dir. Pantoja explained.

The second keynote speaker, Vice Chancellor for Administration Rolando T. Bello, talked about the direction of agrarian reform and what must be done to move forward.

He proposed the consolidation of small landholdings into bigger and more viable farm enterprises to attract formal sector investments and financing, and young and more dynamic actors to replace aging farmers. Vice Chancellor Bello is a former director of IARDS.

“Attainment of the economies of scale through creation of cooperative farms, consolidation of farmlands, and partnerships with contract growing or corporate integrators are important steps to be a true developed sector and a driver of economic growth,” VC Bello explained.

Dr. Marife M. Ballesteros, vice president of PIDS, who served as one of the discussants also proposed similar measures to transform the agrarian economy to a growth sector  — enabling the consolidation of farms, linking smallholder farmers to commercial agriculture, strengthening public-private partnerships, resolving the issues on property rights, and battling legal issues on agrarian justice delivery.

Adding insights to the presentation was OIC Director Garland Leila A. Cuarteros of the Policy and Research Service Policy, Planning, and Research Office of DAR.

She shared the enormous impacts and accomplishments of agrarian reform, specifically on the security of tenure to the agrarian reform beneficiaries who now have better access to credit and financing, as well as private and government assistance due to their individual titles.

However, OIC Director Cuarteros noted the challenges and issues the agency experienced particularly on the database management system of DAR on its functions, internal organization structure and performance, and monitoring and evaluation of the agrarian reform beneficiaries database system.

With these issues and concerns, CPAf Dean Rowena DT. Baconguis posed a challenge to the agrarian reform advocates and CISC to have concrete policy recommendations for the agrarian sector to prosper.