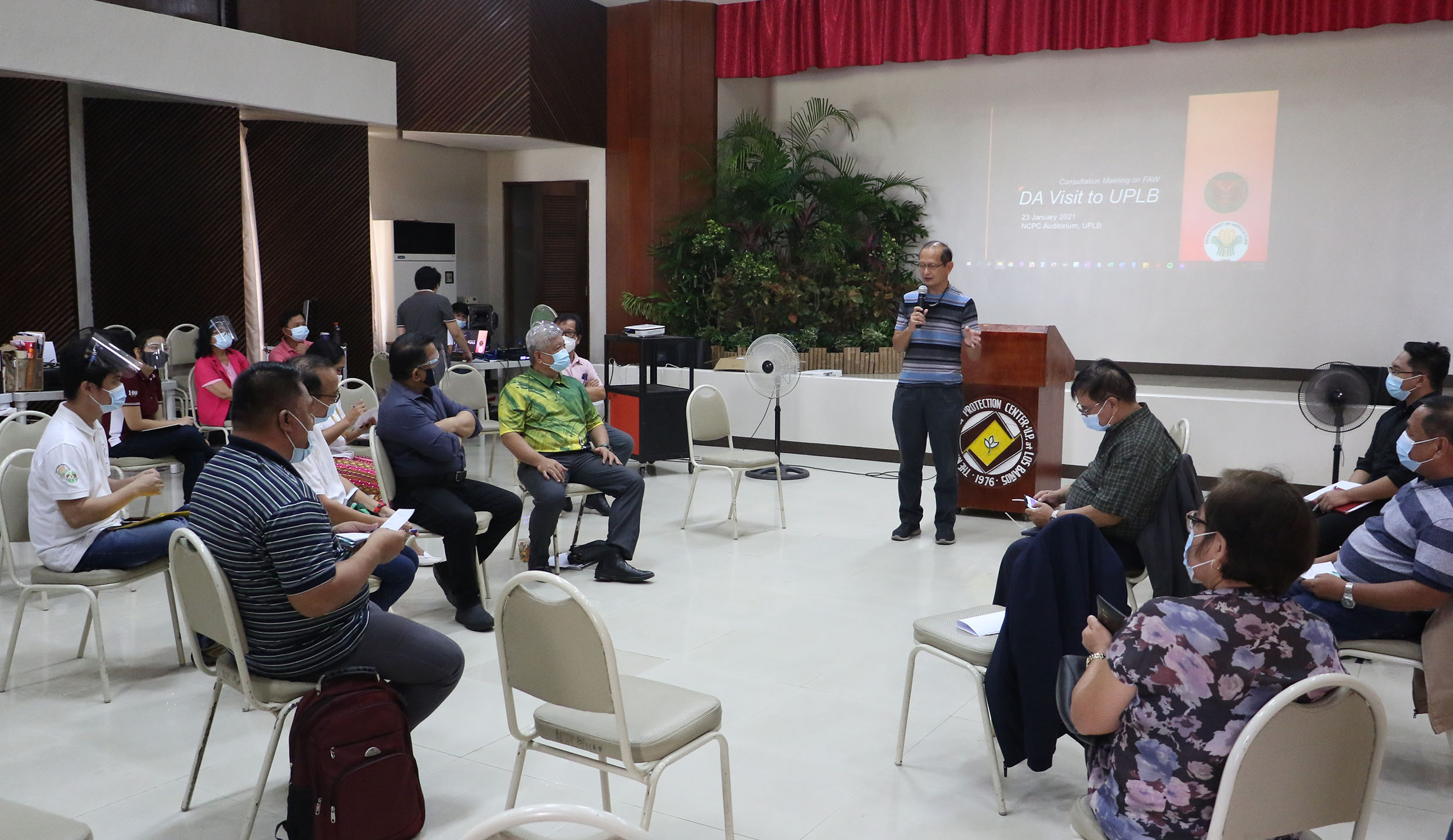 Officials from the Department of Agriculture (DA) engaged UPLB researchers in a dialogue on Jan. 23 to gather information about managing the fall armyworm (FAW) outbreak that has affected farmers nationwide.

The meeting was held at the National Crop Protection Sector (NCPC) and was attended by UPLB’s leading entomologists and experts from NCPC and the Institute of Weed Science, Entomology, and Plant Pathology.

Researchers and scientists from the two units comprise the FAW Management Team under the College of Agriculture and Food Science (CAFS), which was created in 2019. For the past two years, the team has been conducting several research studies on FAW to help farmers manage the infestation on corn. These studies are being funded by the DA-Bureau of Agricultural Research (DA-BAR) and the Department of Science and Technology-Philippine Council for Agriculture, Aquatic, and Natural Resources Research and Development (DOST-PCAARRD).

Dr. Sebastian said that dialogue between DA and UPLB was necessary to put scientific breakthroughs into practice and implement them in large scale among farmers.

“The measure of the success of a scientist is in the outcome of his work, not just in the publication… We are trying to work with you now so that we can pick up some of your good ideas on how to manage FAW, then we can upscale it,” he said.

He and Dr. Mamaril underscored the urgency of developing controlling measures and mitigating the resurgence of FAW before the summer months. Dr. Sebastian also asked for means of determining hotspots ahead of time and for the proper preparations necessary to manage them.

Dr. Lilia Portales, BPI’s focal person for Plant Health and Pest Status, said that based on the reports received by the DA, FAW has affected at least 2,600 hectares of corn nationwide.

She and Wilma Cuaterno, chief of the BPI-Crop Pest Management Division, identified research needs in FAW management, such as devising better ways to lure or catch FAW to improve monitoring, crop diversification strategies, and field sanitation. They also brought up the need to develop standard training protocols for farmers in FAW management to help them identify FAW infestations early.

Dr. Sheryl Yap, director of IWEP, and Dr. Mario Navasero, a scientist at NCPC, presented their units’ research projects on FAW. Among their research highlights were studies on FAW’s life cycle and genetic structure, their alternative host plants, biological control-based pest management of FAW using FAW’s natural enemies, and studies on farmers’ use of pesticides against FAW.

During the open forum, the groups recognized the need to also monitor alternative host plants where FAW can hide in before the planting season for corn and saw the potential of using historical and satellite data to predict which areas are likely to be infested.

At the end of the dialogue, CAFS submitted six research proposals to DA-BAR to help combat the infestation of FAW. (Jessa Jael S. Arana)