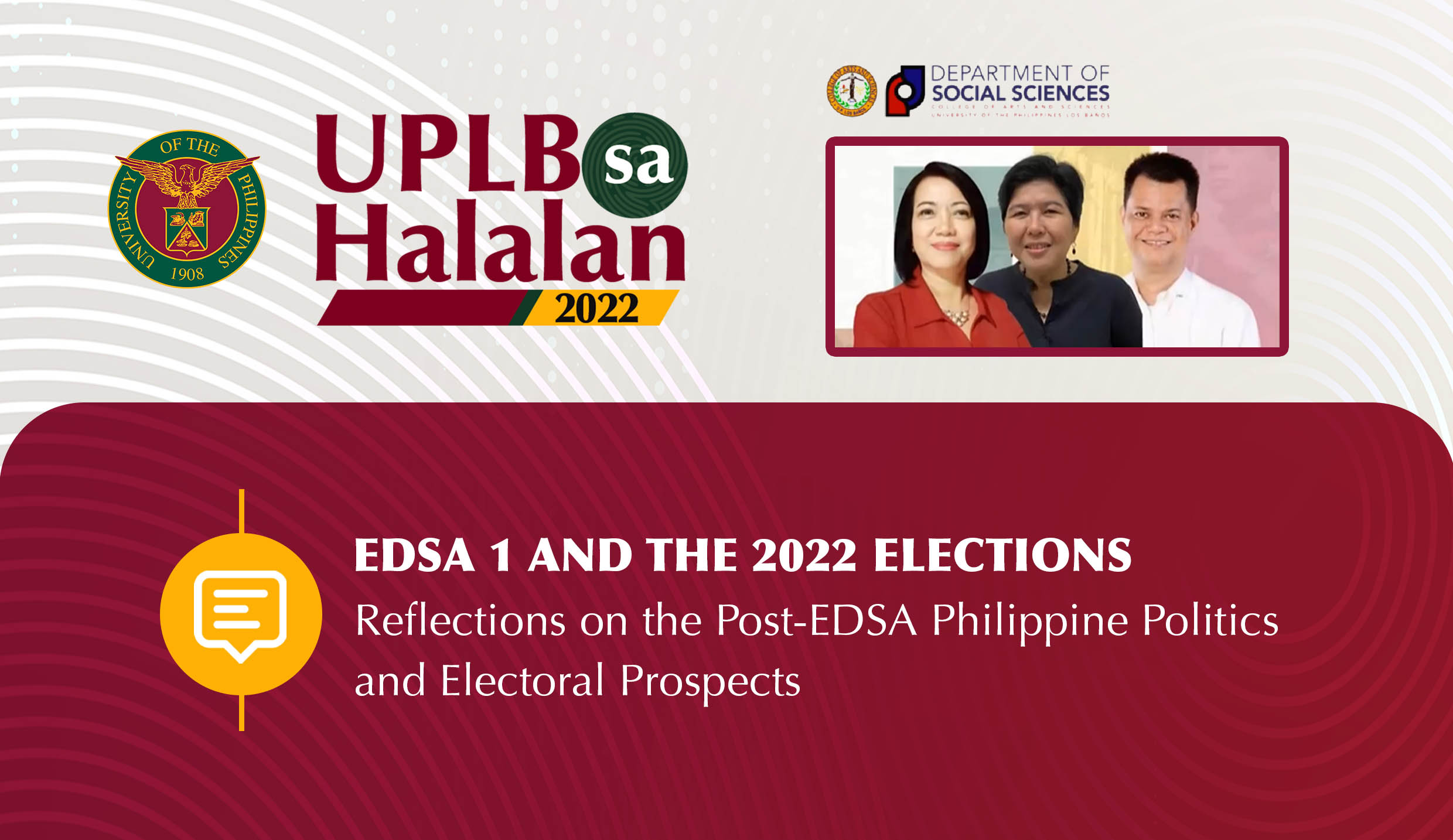 The Department of Social Sciences (DSS) of the College of Arts and Sciences (CAS), together with the UPLB Halalan sa 2022, led an online conversation on EDSA 1 in light of its 36th anniversary and the upcoming national elections this May.

The conversation, entitled “EDSA 1 and the 2022 Elections: Reflections on the post-EDSA Philippine Politics and Electoral Prospects,” was held on Feb. 24 via virtual conferencing.

In her opening remarks, Dean Maribel Dionisio-Sese said that the forum aimed to allow the participants to reflect on and review the impact and relevance of EDSA 1 and to engage in political discourse on the national elections.

Dr. Dionisio-Sese expressed her hopes that the said webinar will impact how its viewers will vote because leaders reflect the kind of democracy that will prevail in the country.

Dr. Carmel V. Abao, an assistant professor at the Department of Political Science in the Ateneo de Manila University, gave the first talk with the title “From Marcos Sr. to Marcos Jr.?”

She first narrated her experiences during EDSA 1 and how she became part of the revolution. What EDSA I represented in 1986, she said, is the reopening of the democratic space, not really the restoration of democracy.

Dr. Abao said that 36 years after EDSA I happened, elite democracy that benefits only a few still prevails and that truth, justice, and freedom are still elusive.

Lastly, she reminded everyone that it should not be “us versus them,” but citizens checking on the government and Filipinos solving social issues.

An open forum followed wherein issues on people’s trust in the government, political discourse, and policy recommendations were discussed.

She first introduced her Facebook page that features informative videos and posters about the Marcoses. She also talked about Marcos as a dictator and the lack of freedom of expression and freedom of the press during his regime.

Using personal and ordinary people’s experiences, she debunked false narratives and lies being claimed about the Marcos regime.

One of these is the ill-gotten wealth of the Marcoses, which many believe to be untrue.

The former chief justice presented evidence of it such as the testimonies of people who returned the stolen money.

Another open forum was held wherein the participants were made to see how Martial Law was wrongly reduced into a family feud and the role of the Supreme Court in Philippine democracy was tackled.

The third talk was by Manuel Luis Quezon III, a columnist and editor of the Philippine Daily Inquirer as well as a political strategy and crisis communications specialist.

Quezon tackled “The Fall of the Fifth Republic” where he narrated how the People Power revolution began and what happened after it, including the assassination of Ninoy Aquino and the coalition that “negotiated” a revolution.

He also tackled bandwagon, plebiscitary, and partyless democracy. According to him, what the people had post-EDSA is the unchangeable constitution and the intolerable price of reform for families that replaced parties.

Quezon also discussed EDSA 2, EDSA 3, and Hello Garci, as well as the Fallen 44.

In the open forum, a discussion ensued on the election being obsolete and the personality of leaders as the ultimate panacea of politics.

Dr. Chrysline Margus N. Piñol, associate dean of the College of Arts and Sciences, expressed gratitude to the guests in her closing remarks.

She stated that it takes more than one person to run the government and that there is still time to choose the right leader. She also pointed out that even after 36 years, the miracle of EDSA 1 still stays with the Filipino people.
The “EDSA 1 and the 2022 Elections: Reflections on the post-EDSA Philippine Politics and Electoral Prospects” webinar may be viewed on the UPLB DSS Facebook page. (Kyle Ramiel Dalangin)