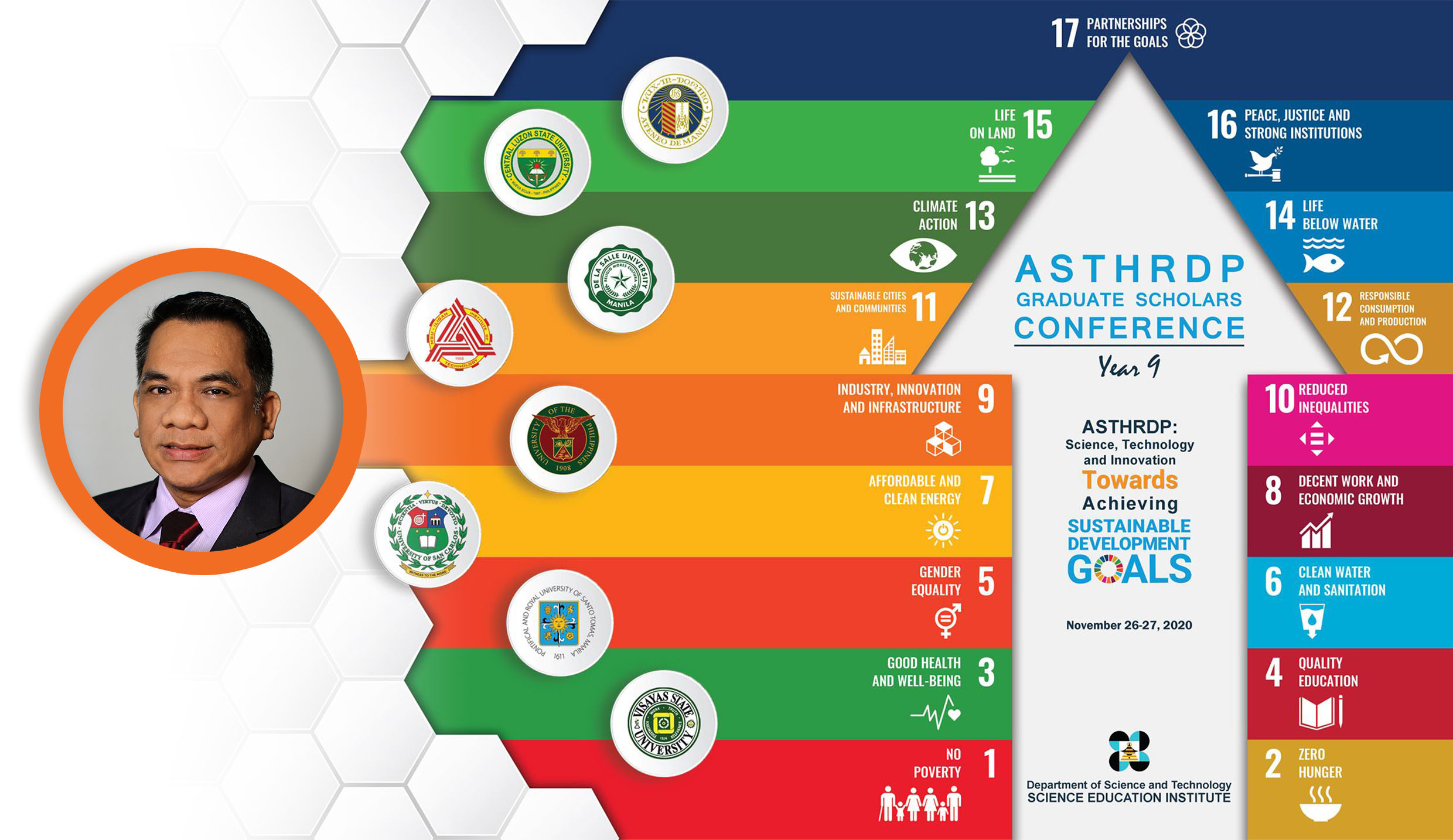 “Unite behind science- and evidence-based policies and policymaking” - Chancellor Camacho

He said this in his talk as a moderator in the plenary sessions of the Graduate Scholars Conference of the Department of Science and Technology-Science Education Institute (DOST-SEI).

“As a platform consolidating science and technology human resources, this conference will significantly contribute to the realization of the SDGs by opening bridges of collaboration among like-minded individuals and organizations,” Chancellor Camacho said.

He pointed out that collaborative efforts and cooperative measures are more important than ever especially in this time of pandemic.

“If we are to make the SDGs a reality, we must, as scientists and scholars, be united in supporting science-and evidence-based policies and policy-making processes,” he said.

The chancellor’s call echoed the message of SEI Director Josette T. Biyo and Science and Technology Secretary Fortunato T. de la Peña in speeches that they gave at the event’s opening program.

Both encouraged the participants to align their future research thrusts with the SDGs while Sec De la Peña also highlighted the partnership of industry and academe in R&D projects.

The UN-SDGs are a call for action by all countries–developed and developing–in a global partnership. It recognizes that ending poverty and other deprivations must go hand-in-hand with strategies that improve health and education, reduce inequality, and spur economic growth, all while tackling climate change and working to preserve our oceans and forests.

Already in its ninth year, the Graduate Scholars Conference organized by the DOST-SEI, focused on contributing toward achieving the UN-SDGs.

Led by the Accelerated Science and Technology Human Resource Development Program-National Science Consortium (ASTHRDP-NSC), the virtual conference ran from Nov. 26 to 27, bringing together scientists, researchers, and scholars of DOST-SEI, from various research and academic institutions across the country.

With the theme ‘ASTHRDP: Science, Technology, and Innovation Toward Achieving SDGs,’ the conference featured research and development presentations, discussions to foster strategic ideas, and the forging of collaborations in response to the global call to attain the SDGs.

The plenary sessions were grouped under the fields of archaeology, agriculture, and health.

In the first session, Dr. Armand Salvador B. Mijares, a faculty member in archaeological studies at UP Diliman, discussed his research in archaeological science and the discovery of a new species of ancient human, H. luzonensis, which added a new member to the genus Homo and makes Southeast Asia an important evolutionary research region.

He emphasized the multidisciplinary potential of archaeology which is the study of the human past using material remains. “We believe that Archaeology is so wide that you can apply it in any science. Once we can get these different disciplines, they can bring in different knowledge to archaeology,” he added.

In the second session, Dr. Glenn B. Gregorio, director of the Southeast Asian Regional Center for Graduate Study and Research in Agriculture (SEARCA) presented the five-year plan of SEARCA entitled “Accelerating Transformation Through Agricultural Innovation” as part of initiatives to contribute toward achieving the SDGs.

In one of the plan’s key components, Dr. Gregorio highlighted the importance of an open collaboration with their partners from the academe, industry, and government; and of engaging the minds of students, scholars, and experts.

“With the complexity of our challenges in agriculture and rural development, what we need are partnerships to attain the SDGs,” Dr. Gregorio concluded.

In the final presentation, Dr. Bernadette L. Ramirez, a scientist from the World Health Organization (WHO), shared to the conference participants their current research work at the Special Programme for Research and Training in Tropical Diseases in Geneva, Switzerland.

In her recorded presentation, Ramirez emphasized that the measurement of WHO’s strategic plan is closely aligned to the SDGs. Called the Triple Billion Target, it proposes to improve the health of billions of people by 2023 through the development of universal health coverage, protection from health emergencies, and overall health and well-being.

The target focuses on the execution and delivery of significant improvements in the health of the world’s population through evidence-based interventions, strengthened health information systems, and support for transformational public health policy.

The conference, which was held as part of the National Science and Technology Week celebration, also featured oral and poster presentations in various fields. (John Glen S. Sarol)