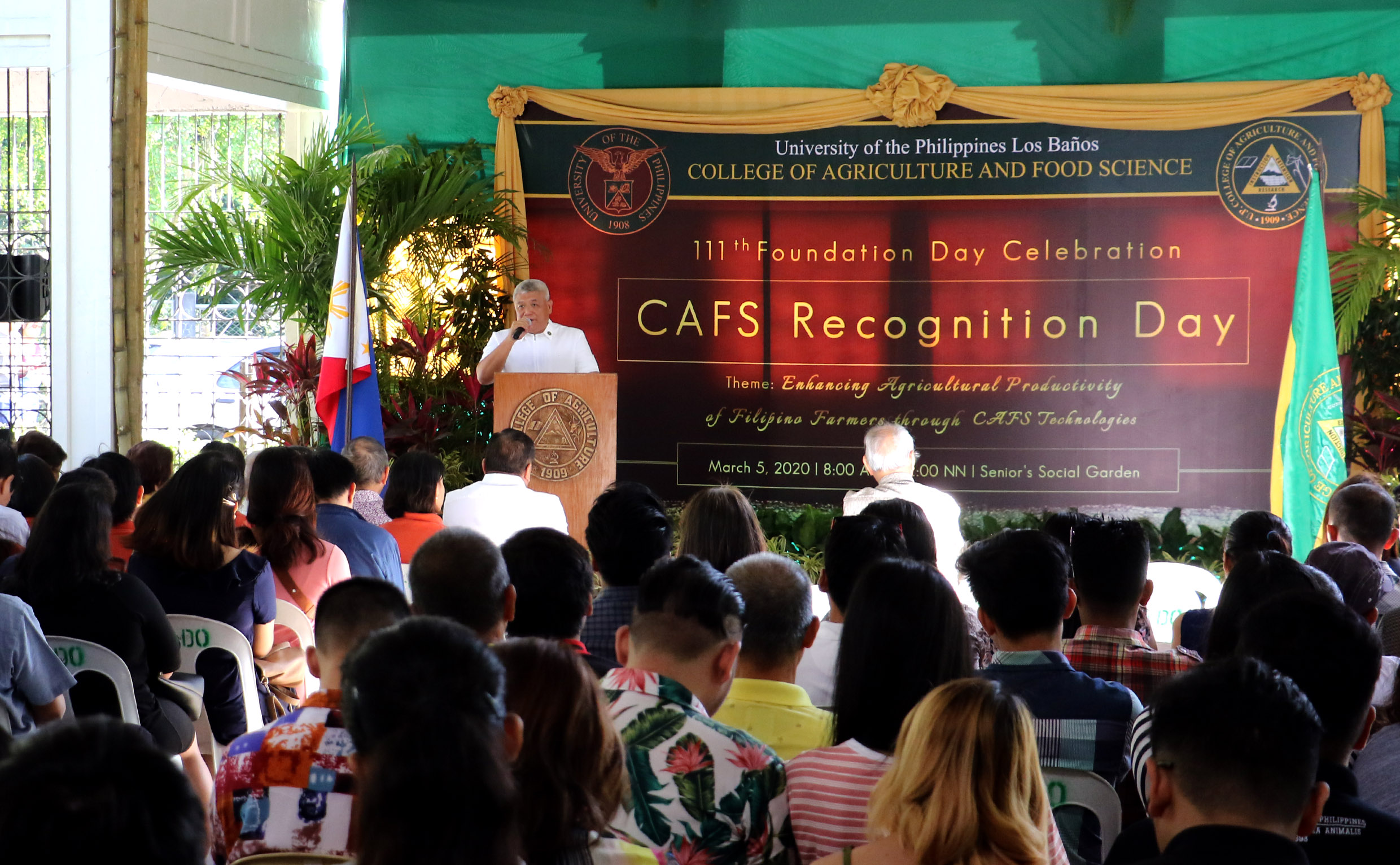 This was how the UPLB College of Agriculture and Food Science (CAFS) used the number “111,” or its number of years in existence to communicate its slogan.

CAFS and UPLB mark their anniversaries on the same day as the latter traces its roots to the former.

CAFS was created on Mar. 6, 1909 by the Board of Regents as the UP College of Agriculture (UPCA). When UPLB gained autonomy in 1972, UPCA became one of its colleges.

The line-up of guests and activities of CAFS on Mar. 3-6, led by keynote speaker Agriculture Secretary William Dar, lived up to the celebration theme “Enhancing agricultural productivity of Filipino farmers through CAFS technologies.”

Sec. Dar headlined the opening program on Mar. 3 at the Senior’s Social Garden, where he enjoined the CAFS constituents to take part in the new paradigm of the Department of Agriculture.

On the same day and venue, the college launched the CAFS Exhibit, which showcased 111 technologies developed by the men and women of CAFS. Farmers, students, and agriculture enthusiasts visited the installation on March 3-5.

A techno demo on Mar. 4, on the other hand, taught farmers, homemakers, retirees, entrepreneurs, and students SNAP Hydroponics, use of white corn as food, and processing of soybean-based food products, kesong puti and other dairy products, and meat products.

On Mar. 6, the actual celebration of the UPLB-CAFS foundation day, the CAFS community gathered at the Pook Pinagtatagan in Brgy. Bambang, Los Baños, the foundation site of the college, for the traditional commemoration program.

In his opening remarks, Dr. Agbisit emphasized the significant contributions of CAFS in transforming the country’s agriculture, thereby helping the university to mold minds and to revolutionize Philippine agriculture through instruction, research, and extension.

Chancellor Sanchez, for his part, agreed, stating that “UPLB-CAFS, as a leading academic and research institution in agriculture, is mandated to promote the development of a robust agricultural sector and industry that meets the challenges of food security, safety, poverty, climate change, and environmental sustainability.”

Aside from the said extension and public activities, CAFS also staged staple activities dedicated for the college constituents.

On March 5, the CAFS Recognition Program honored notable personnel and students of the college.

The awardees included seven staff and two teams who received the Nelia T. Gonzalez Award of Excellence for winning this year’s search for Outstanding Personnel and Teams in the college. Also recognized were 52 personnel who retired recently and 90 who have served the university for the past 15, 20, 25, 30, 40, and 45 years.

The seven topnotchers who placed 2nd, 6th, 7th, 8th, and 10th in the 2019 Agriculturist Licensure Examination were also honored, as well as the students who made it as University and College Scholars for 2nd Semester 2018-2019 and 1st Semester 2019-2020.

Injecting fun in and closing the week-long celebration was the CAFS Family Day on March 6.

Staff from different Institutes of the college participated in the barrio-themed dance competition where they highlighted their respective products and technologies. The Dairy Training and Research Institute (DTRI) won with its own rendition of dairy production and marketing.

Spearheading this year’s CAFS festivities was the Institute of Crop Science (ICropS), together with the CAFS Socials Committee and the CAFS Research and Extension Committees. (CP Sandro, LE Endonela, BT Salazar, and LAL Roces)