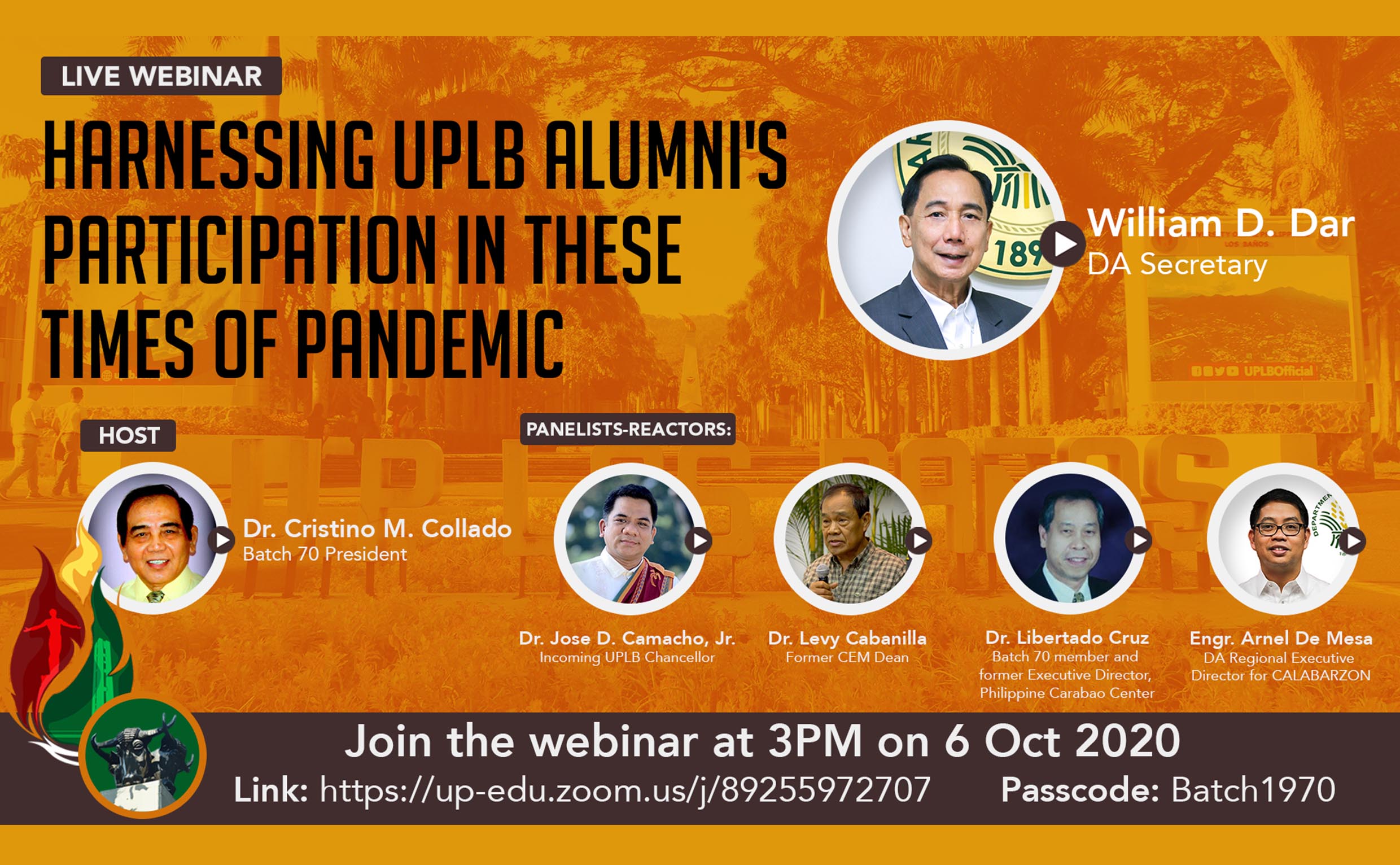 If plans will push through, UPLB may see a wider and stronger tripartite alliance with alumni groups and the Department of Agriculture (DA) in the name of agricultural development in the country.

At the Loyalty Day webinar on Oct. 6 of Class 1970, this year’s golden jubilarians, the prospects for this were preliminarily articulated in the presence of Dr. William Dar, secretary of DA, and Dr. Jose V. Camacho, Jr., incoming UPLB chancellor.

“I wish UPLB to be a trailblazer in harnessing the power of disruptive technologies to elevate Philippine agriculture in the future,” said Secretary Dar, himself a UPLB PhD Horticulture alumnus.

Secretary Dar particularly encouraged Dr. Camacho to spearhead the establishment of what he called the Satellite-aided and Digital Agriculture Center in UPLB, a possible collaborative endeavor of the university with other higher education institutions in the country.

Dr. Camacho affirmatively took on this call from the country’s agriculture chief. He said that such center is aligned to his incoming leadership’s aim to future-proof UPLB and to help the agriculture industry undergo the same.

The economics professor, who will start his term as UPLB chancellor on Nov. 1, added that part of his agriculture-related research and extension agenda is to create a technical working group for each area of the value chain that should become proactive and responsive to the challenges in the agriculture sector.

For Secretary Dar, the expertise and experiences of UPLB are needed every step of the way in dealing with big challenges in agriculture.

Secretary Dar also urged the alumni to help industrialize agriculture through setting up agribusinesses that will be inclusive and will optimize the potentials of the sector’s human capital.

He identified the retired alumni, who both have the financial resources and technical know-how, to pursue agribusiness enterprises. Inclusive agribusiness, he said, is the way forward for Philippine agriculture.

Webinar reactor Dr. Liborio Cabanilla, former dean of the College of Economics and Management (CEM), articulated the alumni’s willingness to help the university realize its goals.

He suggested the creation of the UPLB Alumni Brigade for Agricultural and Rural Economic Development in key areas where alumni thrive. These brigades, he said, will be supportive of UPLB’s mission in the countryside.

“If we are able to harness the collective efforts of alumni and make them feel that they are partners in promoting the mission of the university, it’s a powerful force that will go a long way,” Dr. Cabanilla noted.

Dr. Libertado Cruz, another webinar reactor and a golden jubilarian, suggested for UPLB to strengthen its alumni database, which shall bear the updated contact details of alumni.

Dr. Cruz, a former executive director of the Philippine Carabao Center of DA, said that the alumni is a huge human resource force that can be tapped for future initiatives in agricultural innovation.

Dr. Cristino Collado, president of Class 1970 and a former undersecretary of DA, moderated the online discussion that was livestreamed on Zoom and YouTube. The webinar is the fourth of a series leading to the virtual Loyalty Day celebration on Oct. 10. (Mark Jayson E. Gloria)