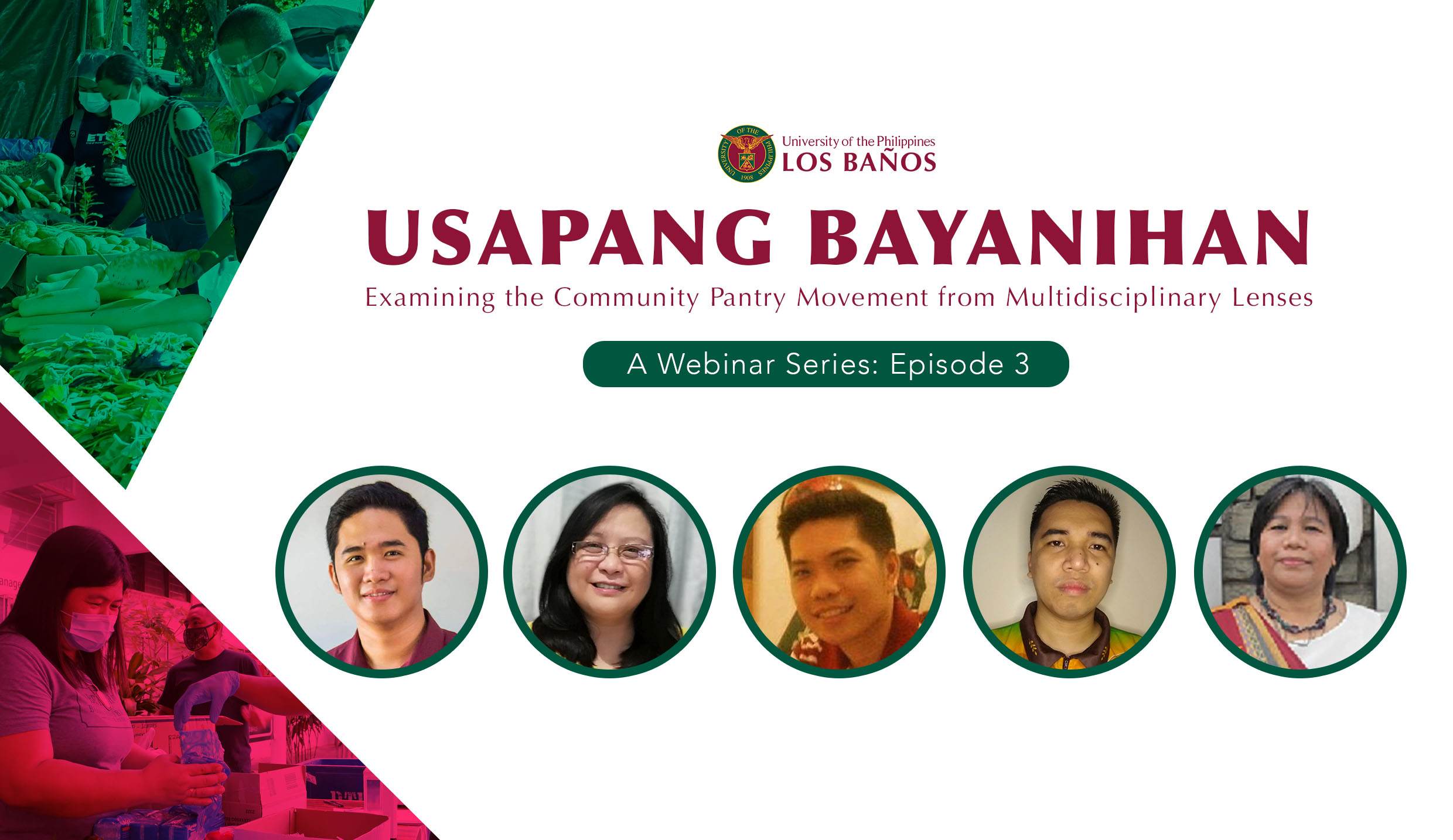 Episode 3 of Usapang Bayanihan webinar series aired on UPLB Facebook and YouTube on May 22, and this time examined the community pantry phenomenon from the vantage point of sociology.

Prince Kennex R. Aldama, faculty member at the Department of Social Sciences of the College of Arts and Sciences (DSS-CAS), pointed out the connection between an individual’s issues and the state’s situations.

He said that the community pantry was established as an emergent agency due to the people’s disappointment over inappropriate, ineffective, and insufficient response of the state to the pandemic with the endless cycle of quarantine, joblessness, and hunger.

He said that the establishment of the community pantry as an emergent agency challenged the dominant structures or the ways of doing things in society and our preconceived notions about people, especially the poor.

He cited three points about the phenomenon, the first one being that community pantry reveals the weakness of established structures and institutions.

Created to feed the hungry, it cannot put an end to hunger, which is a structural and government concern. The state failed to provide sufficient and timely aid, thus human agencies took over.

Aldama said that the popularity of community pantries was unplanned. He likened the phenomenon to a “daluyong” or a surge (of help) initiated mostly by individuals and families.

The second point made by Aldama was that the community pantry challenged the dominant narrative about the poor being “pasaway.” On the contrary, it showed people exhibiting discipline while queuing up, getting only what they needed, and in some instances, sharing what little they have.

He said that being poor should not be equated to a lack of discipline and  rationality, and emphasized the importance for us to know the people who make up our society better.

The third and final point that he used to analyze the community pantry phenomenon is that it challenged the existing discourse between the elite and the masses.

Aldama pointed out that the people did not turn to the rich and powerful elite. Instead it is the powerless urban and rural poor and the middle class who came together and gathered whatever they have, strengthened by the networks of trust that they built through the community pantries. “It’s true indeed that there is strength in numbers,” Aldama said.

He also highlighted the fact that as community pantries were being subjected to threats and its founder, Ana Patricia Non, to death and rape threats; the police interrogations and troll attacks on social media show that community pantries have shattered power and structures of power.

It also made people more critical of structures and of dominant ideas on how to solve the crisis brought about by the pandemic, Aldama added.

On the issue of sustainability of community pantries, Aldama argued that this brings us back to  social structures and the government’s ability to get back on track. “Community pantries can continue as long as the organizers feel the need for it and the situation of endless lockdowns and failure of the health system does not change,” Aldama said.

In closing his analysis of community pantry phenomenon, Aldama expressed his hopes that the implications of community pantries as emergent agencies will serve as a reminder to us that something extraordinary can emerge from simple ways of reaching out; something big and powerful can emerge from the powerless who come together and bring in the limited resources that they have; and something inspiring can come from the little acts of kindness.

Another DSS-CAS faculty member, Girlie Nora A. Abrigo, reacting to Aldama’s talk, discussed two arguments on the popularity and acceptance of community pantries.

First it can be considered a movement, and a contagious one at that. Abrigo said that social movements arise when there is a crisis.

Abrigo discussed the dominance of agency in community pantries, defining agency as the capacity of individuals and groups to initiate changes in the immediate milieu.

She said, however, that we should not let this stop us from expecting a timely, appropriate, up-to-date, evidence-based response from the government guided by the principles of good governance, responsiveness, accountability, equitability, and inclusivity.

The next speaker, Ryan Alvin M. Pawilen, a faculty member at the Division of History of DSS-CAS, presented an analysis of community pantry that he crafted with fellow faculty member and one of the initiators of the UPLB Community Pantry, Dr. Roderick C. Javar.

Their analysis used sociocultural history in terms of linguistics from the Bayanihan Research Frameworks to disprove the idea that community pantry, as one criticism levelled against it says, is a foreign practice and not rooted in Filipino culture.

According to the framework, the name of the initiative should be in the local language, and that it must be understood, accepted, and used by the community. Pawilen argued, however, that basing one’s opinion about the community pantry only on the name is superficial.

He pointed out that language evolves and that English should be considered part and parcel of the lives of Filipinos. Moreover, the educational background of people who set up community pantries and the widespread acceptance of the name are important considerations that should be considered in departing from using its name as a way to discredit the movement .

Pawilen raised the argument that people forgot to highlight the guiding principle of community pantry, “magbigay ayon sa kakayahan, kumuha batay sa pangangailangan,” which indicates that the community pantry share the values rather than the name of other bayanihan activities in the country.

“The community pantry would not be established by so many people in so many places nationwide if this were not rooted in values or Filipino culture,” Pawilen added.

Pawilen pointed out that the value of bayanihan can be found in the community pantry and other situations that happened in history and in other places of the world that can also be translated to different languages yet the representation of the value is the same.

Pawilen cited cases of bayanihan and pagdadamayan in the country in 1862 due to a weevil infestation; in 1877-1878 after El Niño destroyed food crops; in 1934 due to policy problems; in the years during World War II; and most recently during the various disasters that visited the country and in the ongoing pandemic.

He said that bayanihan and damayan have even adapted to technology as proven by the widespread use of mobile wallet apps which are used to send monetary donations to people in need.

To Pawilen, there lies a catch in the use of socio-cultural history in examining CP. He said one must look beyond the name and look at the expression, its context, and underlying values.

He said that “barangayanihan,” which surfaced after community pantries became widespread, is a different initiative altogether because it is state-sponsored and is in effect, “ayuda.” The community pantry qualifies more as bayanihan because the resources emanate from the people. “What is seen here is the genuine help that emanates from simple people,” Pawilen said.

They also identified a conflict in the usage of ‘kalinangang bayan’ since changes in culture must be considered even though they may seem to be consistent throughout time.

For Pawilen and Javar, as presented by the former, community pantry is an expression of bayanihan and pagtutulungan. The name came from, is accepted, and sustained by the community. It is a collective action and an appropriate response to a common social problem and it showcases shared values and is rooted in existing cultural traditions and historical experiences.

In closing, Pawilen said that he and Javar came up with the analysis of community pantry to give justice to the masses through the use of sociocultural history to refocus the lens, perspective, and the experience of the community and the people.

Reactor Gloria E. Melencio, faculty member at the Division of History, DSS-CAS, presented five points regarding the study of Pawilen and Javar on the community pantry as a movement.

She said that community pantry could be translated to the Filipino language “Mga Hapag ng Bayan,” attributing the concept to the Rizalistas of Southern Tagalog, in particular to Suprema Isabel Suarez of Siyudad Mistica in Banahaw in 1993.

She said that similar to its English translation, it means food that is served to be shared by the people.

She agreed with Pawilen and Javar’s analysis that the meaning of community pantry is rooted in the culture of Filipinos. Melencio cited as an example the practice of Filipinos to invite and share food, sometimes by way of greeting, or when welcoming visitors, and more so during the times of need and hunger.

In terms of the language,  she said that community pantry goes beyond opening one’s kitchen but is essentially opening one’s heart. She said that the words “isahapag,” “ilatag,” and “ihatag” means open and selfless sharing of available resources.

Melencio also expressed agreement that the word “community pantry” may be in English, but it is deeply rooted in “bayanihan.”

She pointed out that the root word of bayani (hero) is bayan (people) while bayanihan comes from bayani (hero).  “Kapag pinagsama-sama mo ito, nangangahulugan na ang maraming bayani ay nagbabayanihan sa kanilang pagtutulungan,” Melencio pointed out. (These concepts combined means that many “become” heroes together as they perform collective action through their compassionate concern for and help to those in need.)

Melencio further said that the community pantry has a social characteristic, a movement by ordinary citizens, a collective or communal action. Even if this were given a political meaning, it is undeniably still a movement and a collective action by citizens that is solely aimed at providing food for the hungry.

Melencio also related the phenomenon to the fact that Filipinos by nature are loving, humble, and compassionate; characteristics that are in our folklore, legends, and in our local literature.