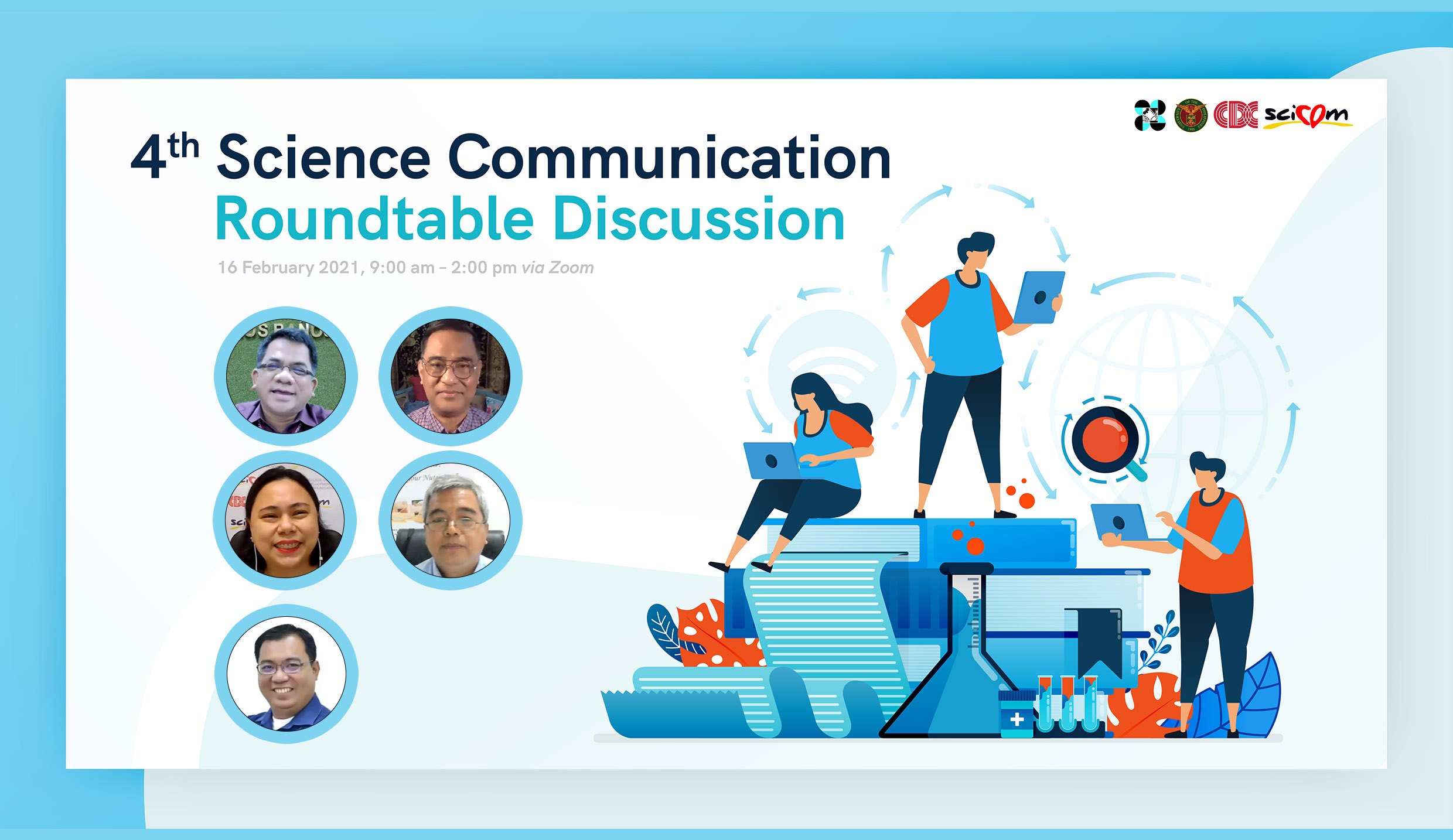 The College of Development Communication Department of Science Communication (CDC-DSC) co-hosted the 4th Round Table Discussion (RTD) with the Department of Science and Technology – Philippine Council for Industry, Energy and Emerging Technology Research and Development (DOST- PCIEERD) on Feb. 16, 2021. This is the first online iteration of the activity and marks the beginning of a series of collaborations between CDC-DSC and DOST-PCIEERD in developing the Science Communication (SciCom) roadmap in the country.

Chancellor Jose V. Camacho, Jr. said that this round table discussion comes at a critical time during the global pandemic. In his message, he underscored that science communication has become more important than ever and called for the more effective dissemination of scientific milestones in a way that is more understandable and appreciated by the public.

Chancellor Camacho acknowledged the enormous task in front of UPLB, DOST, and its agencies, and highlighted UPLB’s responsibility as an academic institution to produce knowledge for the benefit of the public.

He also emphasized UPLB’s aim to be a university whose research and scientific products are not constrained to the academic world, but instead known and appreciated by the greater public, as part of future-proofing UPLB.

Dr. Enrico C. Paringit, executive director of DOST-PCIEERD, encouraged researchers to use SciCom to better reach their target audience. Paringit thanked UPLB for hosting the RTD and said that SciCom plays a vital role in closing the gap in relaying scientific information in the simplest, most accessible way possible.

Dr. Elaine Llarena, assistant professor and chair of CDC-DSC, expressed her hopes that the workshop would open the discussion on the emerging SciCom trends and practices implemented in the Philippines. She looked forward to learning the concerns encountered by the participating stakeholders in their respective fields, gathering insights and identifying a thematic vision for the next 5 years to strengthen SciCom in the Philippines.

Montemayor, who represented the academic sector discussed the topic, Science Communication in the Academe. In his presentation, he shared the brand of SciCom in UPLB and how it is heavily influenced by the Development Communication philosophy in being purposive, pragmatic, and results-oriented.

Burgos, representing the government sector, shared the DOST Science and Technology Information Institute’s (DOST- STII) passionate advocacy in communicating science for the people. During his presentation, he discussed the experience of communicating science to its target audience particularly through the use of digital media which served well especially in the time of the pandemic.

Doctor represented the business sector. As the president of a food corporation, he shared how they adapted DOST – Food and Nutrition Research Institute’s (DOST-FNRI) technologies to explore their full potential.

Doctor said that DOST technologies work for the people by addressing national concerns, which is in line with their company’s mission. Through the knowledge shared by DOST, they were able to bridge the gap of supply and demand as well as offer a solution to problems especially during the time of the pandemic.

The presentations were followed by virtual breakout sessions and were attended by participants and guests from the academic, creative, and media sectors, non-government organizations, and government agencies.

The 4th Science Communication RTD came after the last RTD held in 2016, which attempted to provide systematic directions to SciCom’s pursuit. In 1999, the first RTD focused on strengthening SciCom as a course. It was followed by the 2nd RTD in 2001 which discussed the emerging practices and explored domains in SciCom. (KEAraguas)