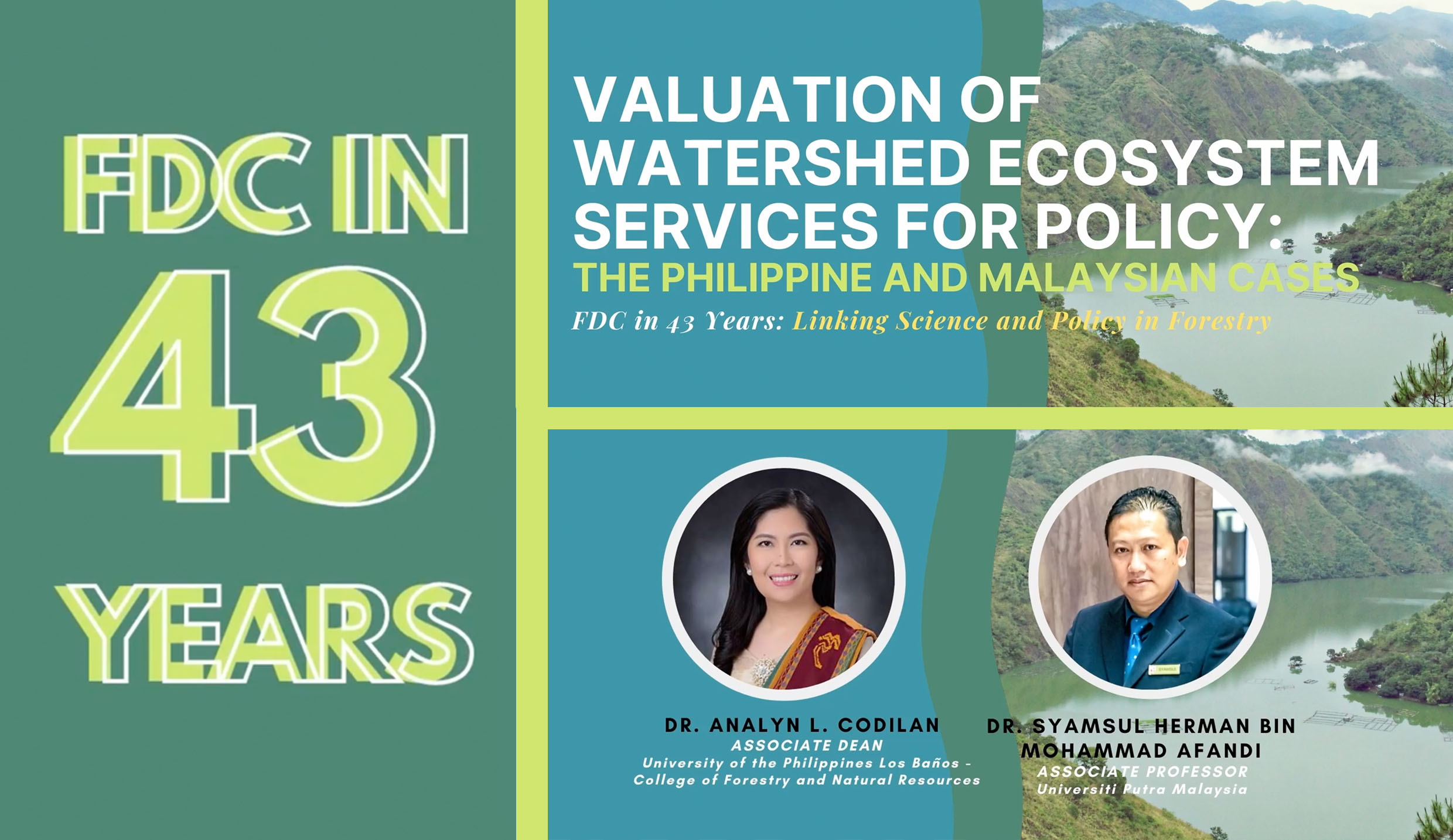 FDC marks 43rd year with webinar on valuation and PES

The UPLB Forestry Development Center of the College of Forestry and Natural Resources (FDC-CFNR) celebrated on Aug. 4, its 43rd Founding Anniversary with the theme, “FDC in 43 Years: Linking Science and Policy.”

It was held alongside the 2021 Forest Policy e-Talks Webinar Series of FDC-CFNR, and was a collaboration between the Center and the Forest Management Bureau (FMB) – Forestland Management Project (FMP) of the Department of Natural Resources (DENR).

The webinar was entitled, “Valuation of Watershed Ecosystem Services for Policy: The Philippine and Malaysian Cases.”

In his welcoming remarks, Dean Marlo D. Mendoza of the College of Forestry and Natural Resources (CFNR), said that the theme of the celebration is meant to emphasize the impact of research in policy making and the development of regulations.

Forester Marcial C. Amaro Jr., CESO III, assistant secretary of the DENR for policy, planning, and foreign-assisted & special projects, and concurrent director of the Forest Management Bureau, formally opened the webinar and expressed his wishes for a successful activity, especially since the public is now more aware of the importance of contributing to the management of watersheds.

In his message, UPLB chancellor, Dr. Jose V. Camacho Jr., expressed his agreement with the choice of the theme of the celebration saying that one of the best uses of research is to serve as the basis for the creation of policy.

“Policy that is grounded in solid scientific evidence and research has the best chance of creating positive impact and growth,” he added.

Chancellor Camacho expressed his hopes that CFNR will continue to pursue such international activities and collaborations as these are “vital for the future of our forest resources.”

As part of the anniversary celebration, the webinar also provided an audio-visual presentation featuring the activities and contributions of FDC-CFNR to the linking of science and policy, as well as messages from the former directors of the center.

The former directors were acknowledged and presented with plaques of appreciation by the current FDC-CFNR staff for their service and continued support.

Need for an inclusive and participatory watershed master plan

According to Dr. Codilan, the paper was developed from a six-month project between the DENR’s FMP and FDC-CFNR.

Covering 25 subwatersheds across Regions 3, 4, 5, and the Cordillera Administrative Region, the project aimed to include and integrate local communities and other stakeholders in conservation activities for forestland management.

Two base periods were used in the valuation of water supply, carbon storage and sequestration, and soil erosion; a current period—2018 to 2022— and a projected period—2022 to 2027. Additionally, a “business-as-usual” scenario and a development scenario were generated to show the differences brought by FMP intervention.

Information from the 2010 and 2015 DENR Land Cover Map, LGU Land Use Map, and River Basin Projects were used to develop both scenarios. The development scenario, however, showed land uses with FMP activities and accomplishments.

Results of the study showed that the subwatersheds’ capacity to provide ecosystem services were positively affected by proper and careful land use interventions.

According to Dr. Codilan, efficient implementation of these updated plans would “allow the watershed to sustainably provide their provisioning, regulating, cultural, and support services.”

She further pointed out that, “plans based on updated data and information are a good source of reference for determining the value of goods and services provided by the watershed.”

Dr. Codilan recommended that a master plan be developed for the collation and congruence of plans from different agencies operating in the subwatersheds. “These development activities are not standalone, and as such, will have an impact on the whole river basin,” she said.

She also emphasized that the planning process must be inclusive and participatory so that all relevant stakeholders are represented.

Finally, for recommendations on policy making, Dr. Codilan said that the results of the study can be used to help DENR develop national guidelines on the implementation of Payment for Ecosystem Services (PES).

Implementing a PES program for eco parks or recreational services

Following Dr. Codilan was Dr. Syamsul Herman bin Mohammad Afandi, Associate Professor at the School of Business and Economics, Universiti Putra Malaysia, who presented the paper entitled, “Payment for Ecosystem and Ecotourism: Sharing the Initiatives and Practices at Recreational Natural Resources in Malaysia.”

The State Forestry Department of Malaysia has dedicated forest lands and permanent forest reserves for the four outlined areas under the NFP.

According to Dr. Mohammad Afandi, the amenity forest, now branded as the forest eco park, is one of the major services provided by the State Forestry Department which is currently promoting the more holistic approach of the Forest Beyond Timber concept.

The forest eco park thus serves the public by providing non-extractive recreational and ecotourism services such as trekking, organized camping, and mountain climbing.

While discussing the framework of their study, Dr. Mohammad Afandi stressed the importance of understanding one’s resources; what you have, its monetary value, its capacity and performance, and the best ecotourism mechanism to apply (PES).

In their PES ecotourism mechanism, they conducted the Contingent Valuation Method and Choice Experiment Method among the tourists, local communities and business, the mountain guides.

This allowed them to have a better understanding of peoples’ preferences and how much they are willing to pay for ecosystem services. “From there we determine the entrance fee, and also the economic value for recreational use,” he explained.

This was followed by several focus group discussions to verify the entrance fees, adjust and finalize the PES mechanism, and establish a trust fund for the location of the eco park.

Dr. Mohammad Afandi said that there are “Five Cs” to consider in implementing a PES program for eco parks or recreational services: Conservation, Comprehensive Safety, Comfort, Cleanliness, and Conducive and Quality Recreational Experience.

He said that in doing this, it is necessary to have a monitoring and reporting system that leads to the accreditation of the parks.

According to Dr. Mohammad Afandi, tourist feedback and interactive media can help in monitoring the eco parks, especially since people from different generations use social media.

“You need to have a public relations officer, we need to understand,” he pointed out.

Dr. Mohammad Afandi concluded his presentation by sharing their goals for the future, as well as the actions they have taken to achieve them.

Among these are constitutional laws that would make ecosystem services chargeable according to the law; more collaborations with state forestry departments; the incorporation of economic valuation in other studies; and looking into Forest Beyond Timber as a non-consumptive source of income from forestry.

After the presentation of the papers, the floor was opened for questions from the audience.

To answer a question regarding the reception of their study by concerned agencies, Dr. Codilan explained that their paper is currently being considered for inclusion in the PES mechanism being developed by DENR.

When asked if the locals have a share from the fund generated by the ecotourism tickets, Dr. Mohammad Afandi explained that the local communities are not really included as stakeholders in the fund as the forest area used belongs to the Forestry Department. He pointed out that it is important to clearly identify the stakeholders of a project in order for them—the stakeholders— to fully benefit from the fund.

Dr Codilan was asked about the other types of research needed to arrive at an estimated total economic value of watershed ecosystem services.

“First and foremost, there should be data because that is the number one problem that we had when we started with the project,” she said. “We really had no primary data regarding water, soil carbon, and we had to work with secondary data for that,” she added.

To strengthen the linkage between science and policy, Dr. Mohammad Afandi believes that one way would be to add a clause including ecosystem services into the Forest Act. This would provide the Forestry Department with a power source that would allow them to charge for ecosystem services.

Since ecosystem valuation is an abstract and hard-to-grasp subject, Dr. Codilan explained how important it is to effectively communicate the results of their research, so that they can reach the hands, hearts, and minds of the policy makers and the public.

“I believe that that is our mission; we should design our research studies to solve real life problems and influence, eventually, policies,” she said.

Dr. Mohammad Afandi was asked if company projects inside the amenity forests are mandated to contribute part of its revenue to the forest area. According to him, companies are required to pay a royalty and a cess fee to the state.

Complete recordings of the webinars can be found on the official Facebook page of FDC-CFNR (Sebastian S. Fresnoza)