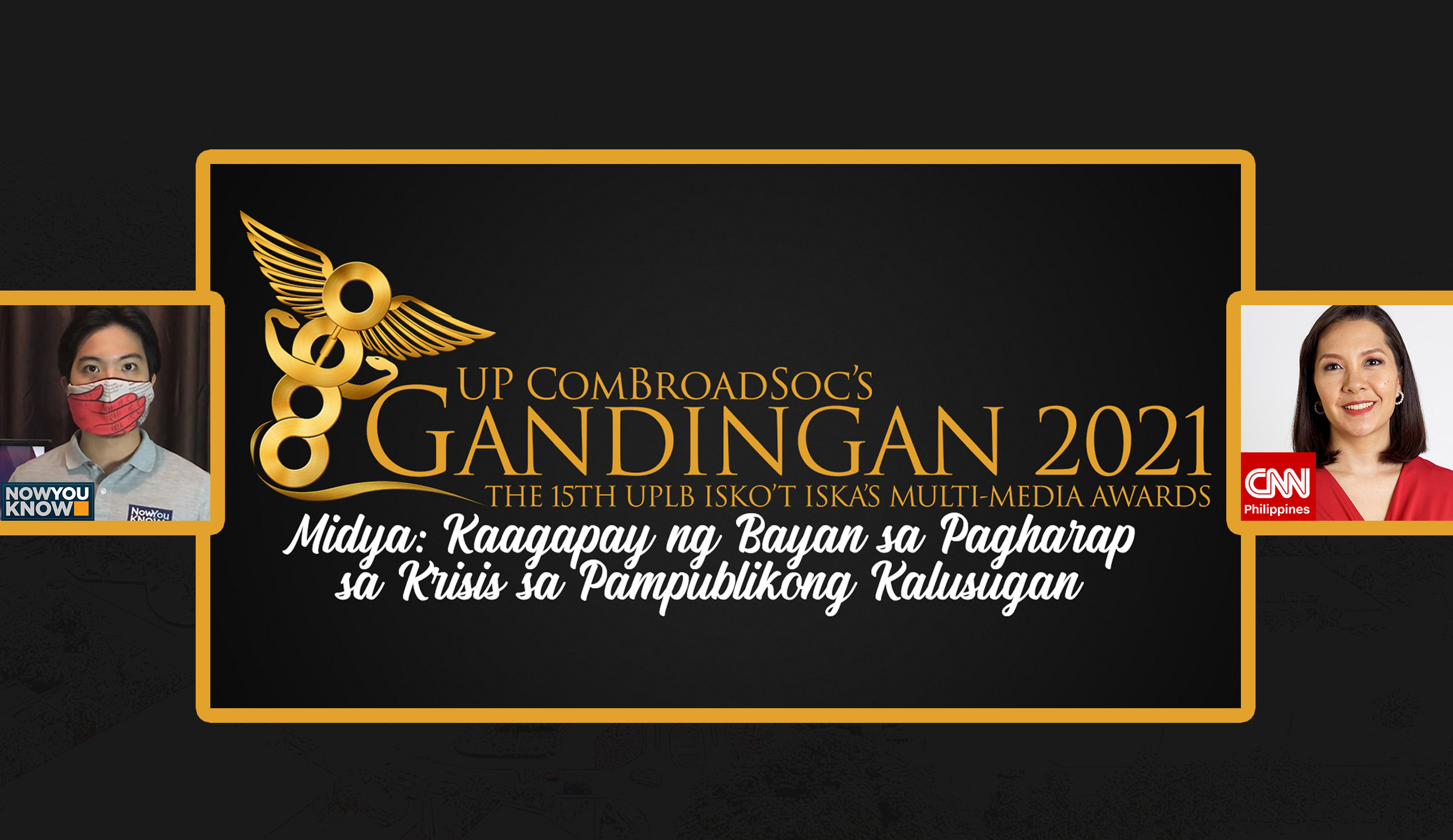 The role of media in the on-going COVID-19 pandemic was tackled at “Gandingan 2021: The 15th UPLB Isko’t Iska’s Multi-Media Awards,” which was held on 22 May 2021 virtually via Facebook.

The UP Community Broadcasters’ Society (UP ComBroadSoc), a socio-civic student organization based at the College of Development Communication (CDC), organized the annual event. It is the second time that it was held virtually, the first time being in July 2020, amid the onset of the pandemic.

Awards as challenge to the recipients

According to Mark Lester M. Chico, founder of Gandingan and faculty member at the Department of Development Broadcasting and Telecommunication (DDBT), the awards ceremony is UP ComBroadSoc’s way of engaging media outlets and journalists all over the country in the ways of the College of Development Communication.

Chico said that the awards symbolize a challenge for the recipient to not only uphold press freedom and responsible journalism, but foremost, to use their influence to amplify the voice of the people. Hence, as long as there are sectors that continue to be marginalized, Gandingan will continue to resound, he added.

Role of media in future-proofing and as frontliners

The UPLB and CDC administrations also expressed their support for Gandingan’s cause.

Chancellor Jose V. Camacho, Jr., in his message, said that, more than ever, the media plays a vital role in the current public health crisis, particularly in future-proofing policy making by providing the public and administrators with timely and reliable information so that they can come up with informed decisions as society gears toward the new normal.

For her part, CDC Dean Ma. Stella C. Tirol recognized journalists also as frontliners, bridging the health information gap between policymakers and experts, and the public, who are all locked down in their homes and who are relying on the media for legitimate and popularized health information on what is happening on the world outside.

Aside from being an awards ceremony, Gandingan also serves as UP ComBroadSoc’s public service program, partnering with communities and development agencies each year.

This year, the student organization partnered with Silungan ng Pag-Asa, a temporary shelter for indigent cancer-afflicted children and their caregivers who come to the Philippine General Hospital (PGH) in Manila from far-flung areas for treatment.

Gandingan has constantly refined its selection process over the years with the ever-evolving media landscape and development problems in the Philippines.

The judges, some of whom are experts in various development concerns, screened a total of 168 entries from 80 programs submitted by media organizations all over the country.

For the major awards category, the Gandingan ng Kaunlaran, the highest award, was given to Now You Know (NYK), an independent online news platform that endeavors to fight disinformation and increase political participation, primarily among the youth. The Gandingan ng Kalusugan recipient was New Day, the morning news program of CNN Philippines.