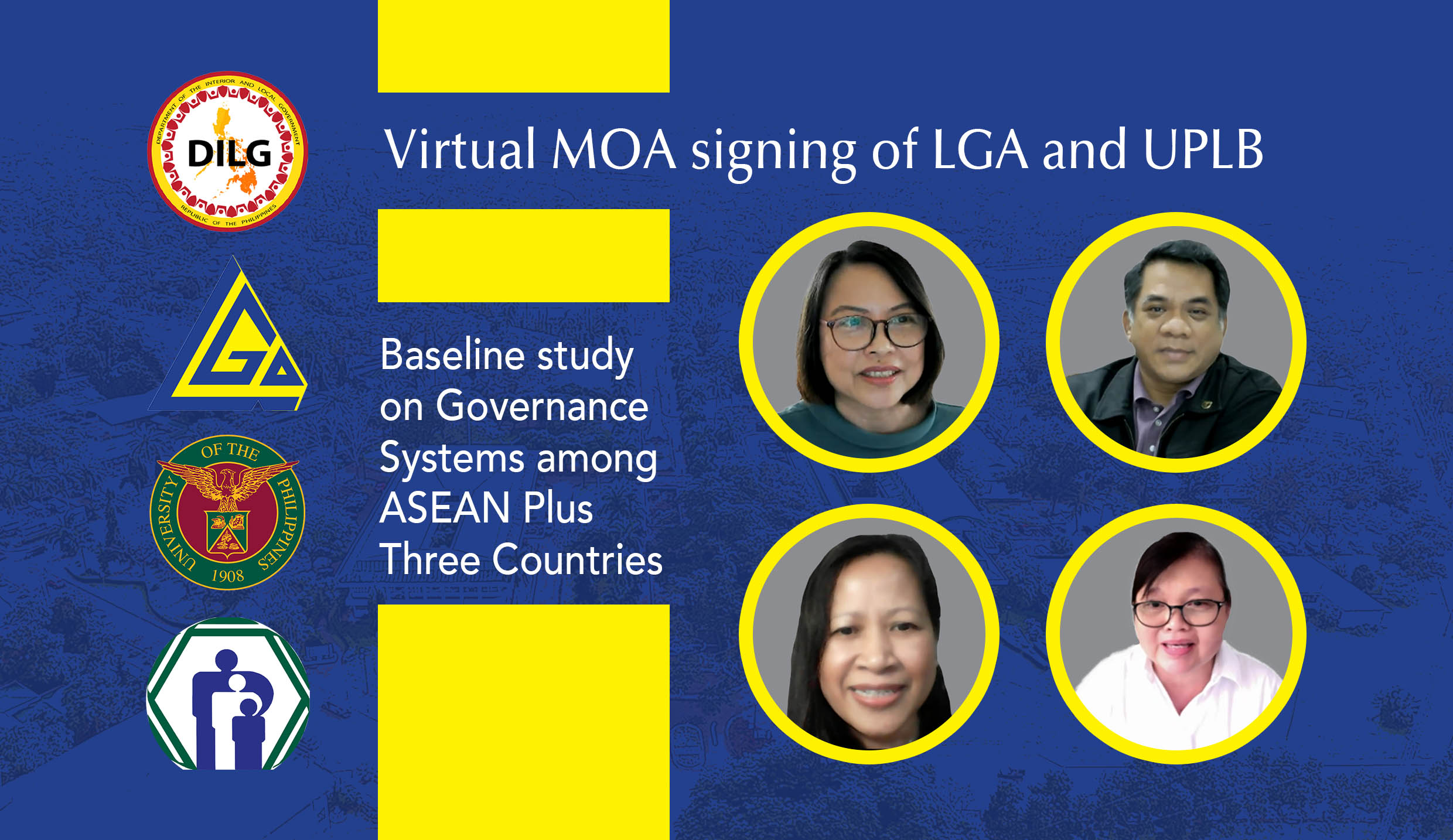 On Aug. 19, the Local Government Academy (LGA) of the Department of the Interior and Local Government  and the College of Public Affairs and Development of the University of the Philippines Los Baños (UPLB CPAf) signed the Memorandum of Agreement (MOA) for the project entitled, “Baseline Study of the Governance Systems among the ASEAN Plus Three Countries.” The primary signatories were LGA Executive Director Thelma T. Vecina and UPLB Chancellor Jose V. Camacho, Jr. with LGA Research and Policy Development Division (RPDD) Chief Marciana C. Obispo and CPAf Dean Rowena DT. Baconguis, as witnesses.

RPDD Chief Obispo presented the rationale of the UPLB-LGA project to the virtual audience. According to her, the project primarily aims to establish a network of local governance bodies among ASEAN Plus Three (APT) countries.

The 10 ASEAN Member States, the People’s Republic of China, Japan, and the Republic of South Korea comprise the APT countries. APT was created in 1997 to promote East Asian Cooperation towards the building of the East Asian Community, with ASEAN as the driving force.

To create the APT network, there is a need to study its viability and identify structures and systems that will harmonize local governance bodies across the region. As stated in the MOA, the inclusion of local government bodies in decision-making in the ASEAN will emphasize the value of communities and coherent implementation of regional initiatives.

Chancellor Camacho noted that the COVID-19 pandemic has shown the need to create partnerships and networks. “Such a network would be a boon when it comes to the sharing and propagation of the best programs and practices,” he said.

Dir. Vecina also expressed her support for the collaborative project and recognized the long-time partnership of LGA with UPLB. “As an institution that is committed towards local governance excellence, the LGA commits to work with UP Los Banos towards producing a research study that will help transform the dynamics of local governance bodies in the ASEAN region,” she said.

CPAf Dean Baconguis, likewise, shared her thoughts about the project in line with the mandates of UPLB and the College. “The vision of streamlining local governance in ASEAN is also shared in our mandates at the University. CPAf-UPLB is about improving distinctive excellence in governance and development, and we share LGA’s commitment towards these goals not only in the Philippines but beyond the Philippines,” she mentioned.

UPLB, through CPAf, will prepare the research design and workplan and develop analysis tools and post-study feedback form. LGA will facilitate the communication and coordination between UPLB and APT Countries.

Implementation of the 14-month long project began in May 2021. Networking workshops, meetings, and focus group discussions will be conducted to collect the data and produce the country and regional reports. (David John F. Rodriguez)