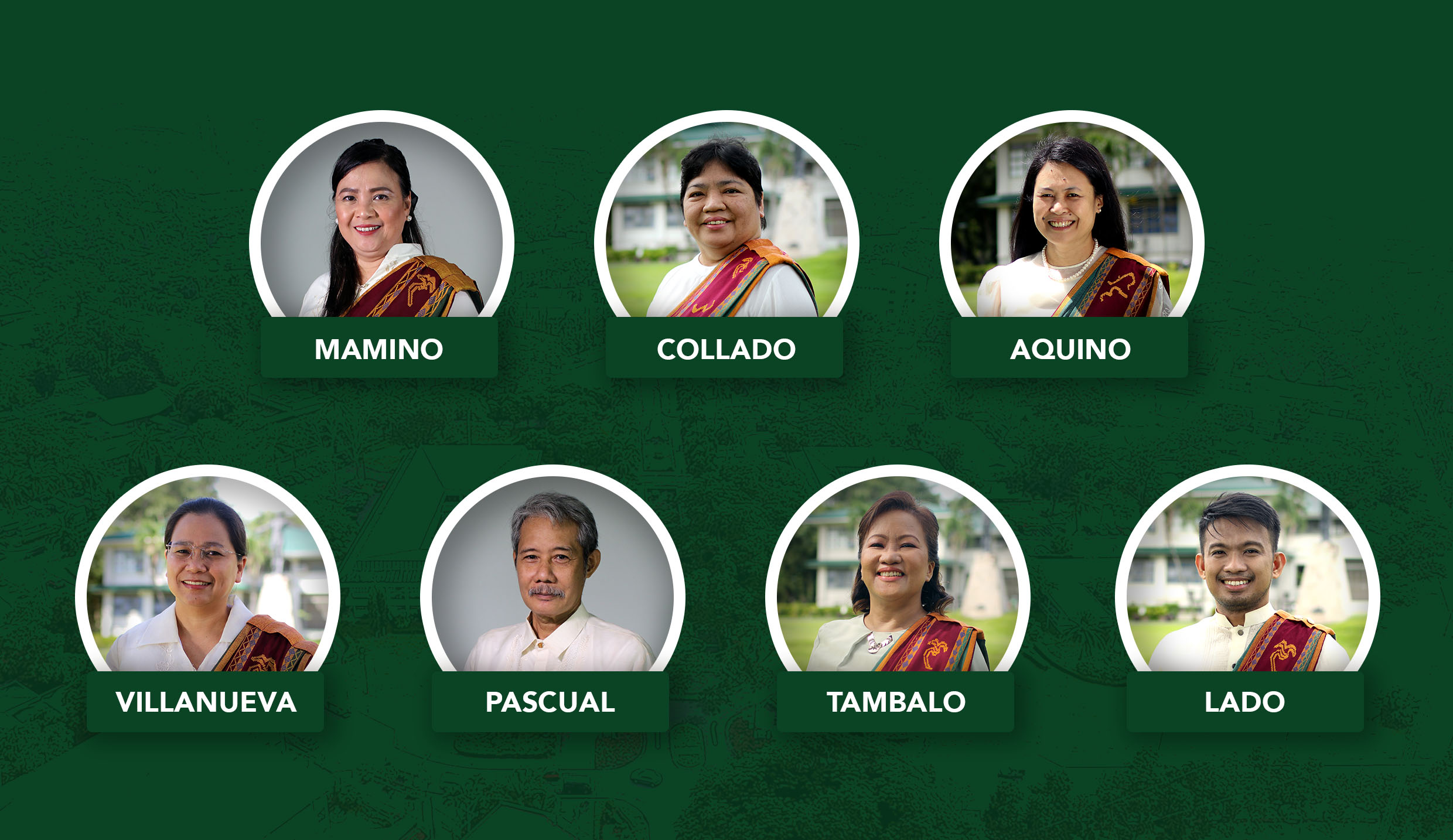 Meet the new assistant to the chancellor, assistants to the VCs

Chancellor Jose V. Camacho, Jr. has identified the university personnel who are part of his administration effective Nov. 1, 2020.

Dr. Mamino rose through the ranks at the College of Public Affairs and Development (CPAf) where she began work as a clerk, and then became a university researcher, and later, a university extension specialist. In August 2018, she was appointed as the assistant to the dean. She holds a Master of Public Affairs from UPLB and PhD Management from Colegio de San Juan de Letran Calamba.

She is a member of various university committees, including the Bids and Awards Committee, and took a certification course as a public procurement specialist. Dr. Mamino was named CPAf’s Outstanding Administrative Personnel in 2008 and Outstanding Extensionist in 2020.

Professor Collado is the former director of the Institute of Statistics (2004-2007) where she teaches statistics and conducts research work. As an assistant professor, her expertise are survey methods, development studies, and impact evaluation.

Miss Tambalo has been advocating for the welfare and development of research, extension, and professional staff (REPS). She is the UPLB representative to the UP System REPS Welfare Council (RWC) and member of the UPLB RWC. She also chaired the UPLB REPS Welfare Committee and once served as project development officer at OVCRE (2015-2016).

As a university researcher and microbiologist at the National Institute of Molecular Biology and Biotechnology, she heads the National Immunological Testing Laboratory and the Enzyme Laboratory. She is a former affiliate faculty member at the Institute of Biological Sciences and belongs to the first batch of Filipinos in the UK-based The Leaders in Innovation Fellowship Program.

Prof. Nanette A. Aquino, MM | Assistant to the Vice Chancellor for Administration

She remains as the AVCA, a position that she has been holding since June 2019. Prior to this, she was the assistant school secretary of the Graduate School (2017-2018) and associate dean of the College of Economics and Management (2012-2016).

Engr. Gregorio S. Pascual, Assistant to the Vice Chancellor for Planning and Development

Engineer Pascual, UPLB’s resident civil engineer, keeps his post as the AVCPD, which he has been appointed to since November 2014. He is also the deputy director of the University Planning and Maintenance Office.

Among the infrastructure projects that he led are UPLB’s Classroom and Comfort Room Renovation Project and the Project Inspection of the eUP Component 4: Fiber Optic Backbone Project. He obtained his BS Civil Engineering from Northwestern University in Ilocos Norte.

Dr. Villanueva is organic to OVCCA where she is a university extension specialist and head of technical services, assisting the vice chancellor in the management, coordination, and implementation of community affairs programs of UPLB for almost a decade now.

She is secretary and member of the Joint Management Committees of UPLB with eight allied agencies that lease UPLB lands. She also had a two-year stint at the Business Affairs Office-OVCCA where she was a development management officer. She earned her PhD Extension Education from UPLB.

He has been officially involved in student affairs since becoming the head of the then Student Organizations and Activities Division in 2016-2017, then as its PDA in 2018, under the former Office of Student Affairs (OSA). When OSA was elevated into OVCSA early this year, he became the director of the Office of Scholarships and Grants.

Lado is an assistant professor in genetics at the Institute of Biological Sciences and a holder of MS Genetics. Aside from doing genetics research on coconut, he has also led UPLB-funded studies about student organizations in the university. (Mark Jayson E. Gloria and Juan Paolo A. Aquino)