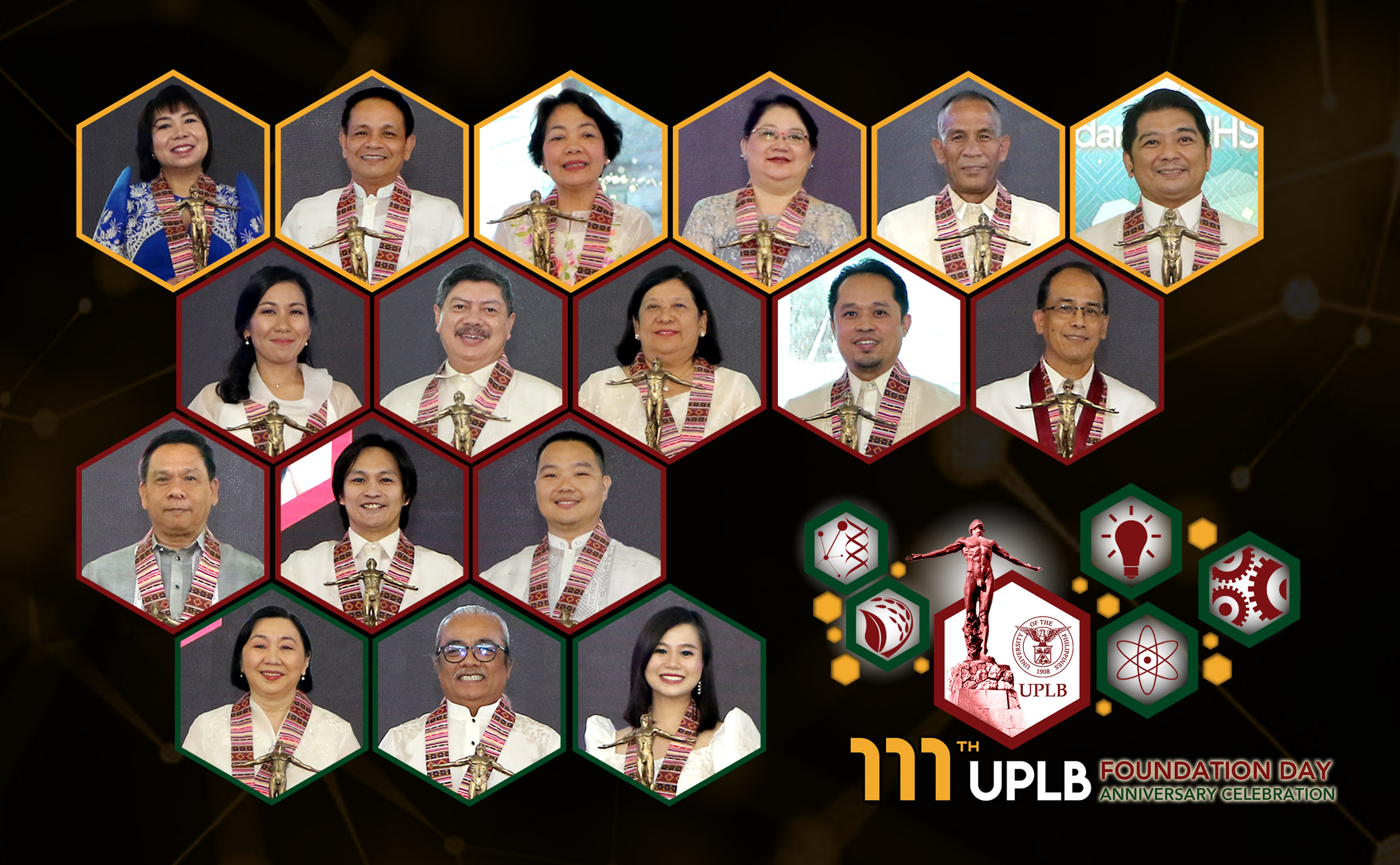 They belong to different sectors in the university but their common quest for service and professional excellence brought them together on one stage.

Dr. Dinah Pura T. Depositario of the Department of Agribusiness Management and Entrepreneurship-College of Economics and Management (CEM-DAME), Dr. Ireneo L. Lit, Jr. of the Institute of Biological Sciences-College of Arts and Sciences (CAS-IBS), and Arlene C. Gutierrez of CEM-DAME (3rd-5th from L) were named this year’s outstanding teachers.

Carolyn E. Alcasid of the Institute of Plant Breeding-College of Agriculture and Food Science (CAFS-IPB), Dr. David Emmanuel M. General of the Museum of Natural History, Scientist Nelly S. Aggangan of the National Institute of Molecular Biology and Biotechnology (BIOTECH), and Dr. Dixon T. Gevaña and Dr. Ramon A. Razal of the College of Forestry and Natural Resources (3rd-7th from L) were hailed as outstanding researchers.

Meanwhile, Jeremy Reuel N. Dela Cruz of the Department of Humanities-CAS and Ryan Rodrigo P. Tayobong of the Institute of Crop Science-CAFS (3rd-4th from L) tied for the Outstanding Artist Award.

They were joined by Assistant Vice Chancellor for Administration Nanette A. Aquino (rightmost) on stage.

In their respective messages, President Concepcion and Chancellor Sanchez commended the awardees for upholding UP’s tradition of honor and excellence.

For his part, Chancellor Sanchez applauded the awardees’ hardwork and commitment and enjoined the guests, many of whom are university officials and employees, to be inspired by their examples. He also reminded them to prioritize the university’s welfare amid diversity and differences.

“When we prioritize UPLB and its interests, we will all emerge as winners, for UPLB’s accomplishments are also ours,” he concluded.

“Creativity, innovation, and technology” served as the centerpiece of this year’s founding anniversary rites. An exhibit featuring five champion and five emerging technologies reflecting the theme of the celebration was installed at Baker Hall during the festivities.

Dr. Serafica, who serves as technology commercialization and intellectual property consultant to UP and De La Salle University, enjoined the awardees to be guided by “DRIVE” to better serve the country.

He also called on UPLB to pay attention to what he referred to as TRIM3 in order to succeed in technology commercialization. TRIM3 means technology focus/advantage, regulatory pathway, intellectual property, market potential, manufacturing scale-up, and money.

In his message on behalf of the outstanding personnel, outstanding researcher Dr. Razal said that it is through using UPLB’s new knowledge and technology where the university can better serve the public. (Mark Jayson E. Gloria)