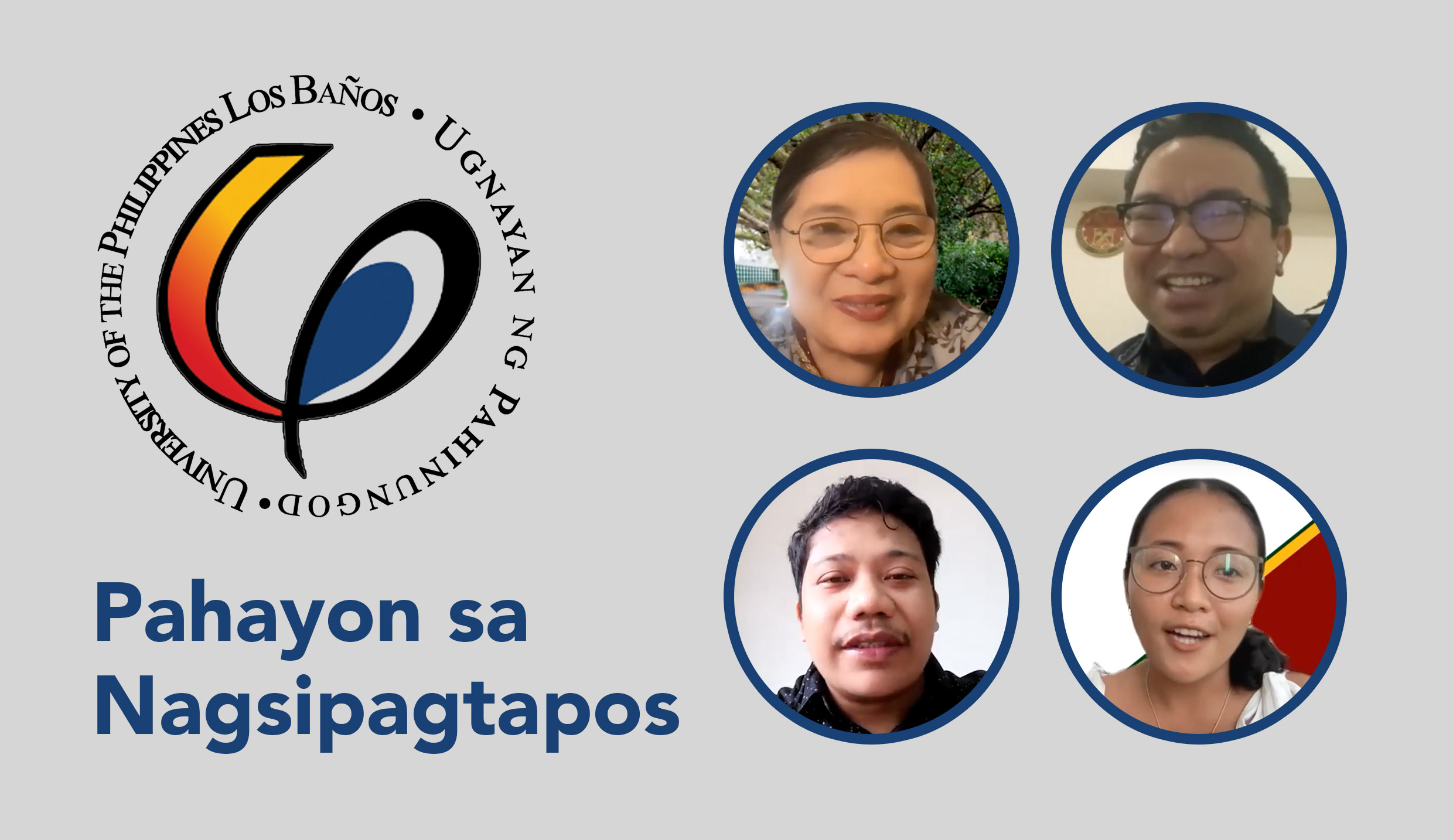 The Ugnayan ng Pahinungod recognized their graduating volunteers in an online ceremony on July 31. The program Pahayon 2021 honored 18 student volunteers—15 undergraduate and 3 graduate students—who were officially bestowed their honorary Pahinungod pin as a token for their service.

The Pahayon is a sending-off ritual that the Pahinungod traditionally holds for its volunteers before they leave for their fieldwork. In this ceremony, the Pahayon sends off graduating volunteers to the path they have chosen as the Pahinungod wishes them great success and happiness.

In his message, Chancellor Jose V. Camacho, Jr. recognized the role of the Pahinungod in developing underserved communities and commended the graduates for pursuing public service as students.

“UPLB hopes that the spirit of volunteerism and public service will remain very much alive in your hearts as you pursue your respective professional and personal paths beyond life at university,” he said.

(“Ending a term in office or finishing your degree does not entail the ending of our service, and it does not end our love and service for the University of the Philippines and our country.”)

(“Whatever profession you choose, whatever paths you take after graduation, there is always an opportunity to serve in whatever capacity we have.”)

The program also featured testimonies from its alumni and graduating volunteers about their experiences and learnings during their time with Pahinungod.

Carmel Rose Rolloque, BS Agricultural Chemistry, shared to the audience how she first joined the Pahinungod to help her own community.

“After hearing stories of the volunteers na nakapagserve na dun sa mga underserved communities, I realized that I was still very fortunate kasi I was able to enter UP and have access to the best education that I could possibly have… From that day wherever I go, I always make sure to be more giving in any way possible,” she said.

Vince Michael Docta, an alumnus of BS Development Communication, shared his story as an undergraduate student who was involved in various extra-curricular activities and became interested in Pahinungod after seeing their alumni facilitate trainings for student organizations. He said that his time with Pahinungod helped hone his skills in training facilitation and inculcate in him the spirit of volunteerism.

Reggie Flordeliz, a BS Applied Mathematics alumnus, said that Pahinungod provided him with training that helped him later in his career as a public school teacher. Aside from gaining teaching experience in the field, he also brought with him insights that helped him in his profession especially in the pandemic. One of these is the importance of debriefing, to allow teachers to process what they went through and prepare themselves for the following school year.

The Ugnayan ng Pahinungod was first established in 1994 by former UP President and UPLB Chancellor Emil Q. Javier to intensify public service and volunteerism in the culture of UP.  It was institutionalized in all UP constituent universities in 2001. (Jessa Jael S. Arana)