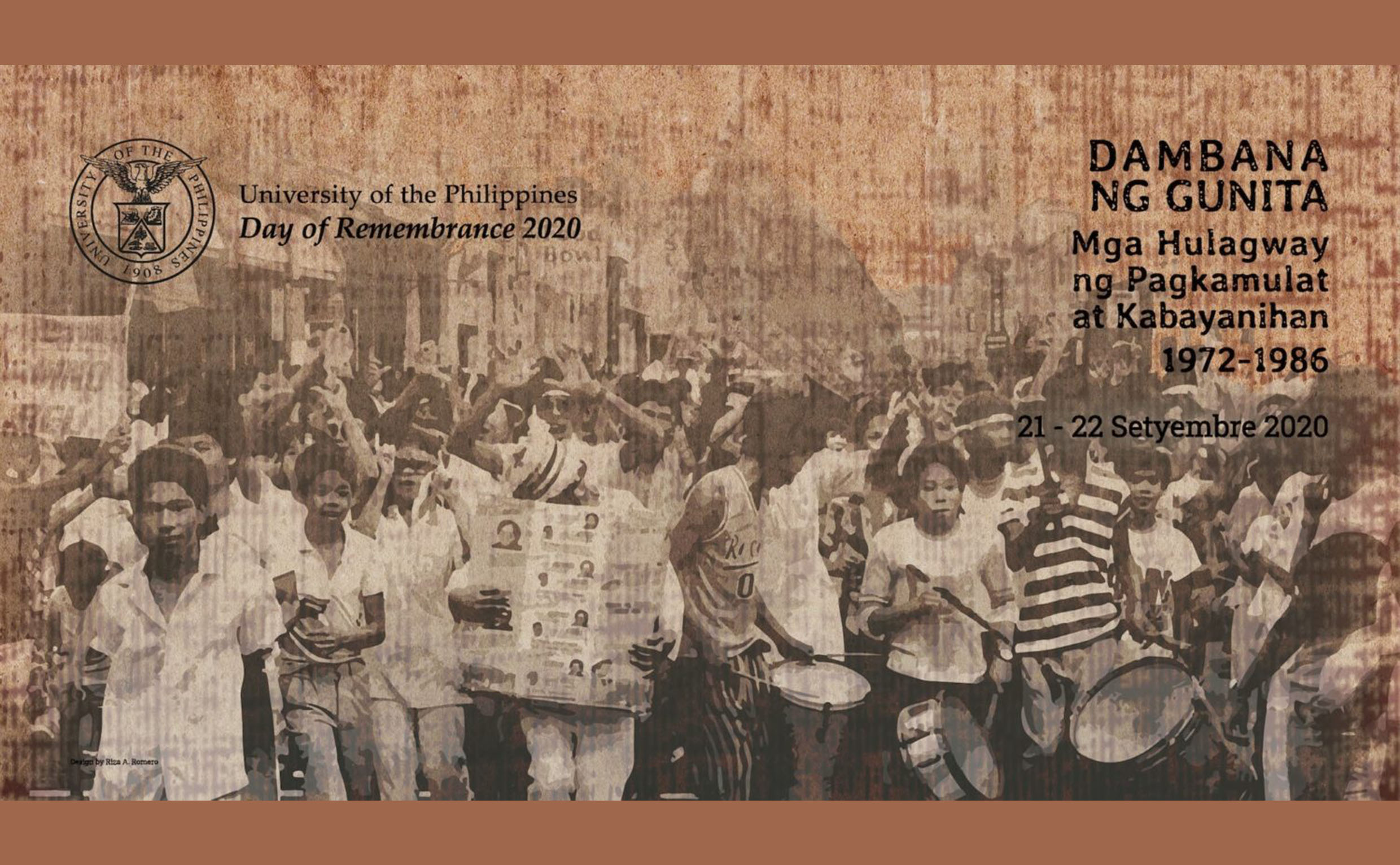 Two years after UP President Danilo L. Concepcion signed Proclamation 1, Series of 2018, which dedicates Sept. 21 of every year as the UP Day of Remembrance, the university commemorates and honors the memory of UP’s martyrs who fought during the Martial Law continues despite the on-going pandemic.

President Concepcion, in his welcome message, said that the sacrifices made by the UP faculty members, staff, and students in fighting dictatorship during Martial Law should never be forgotten.

The UP Day of Remembrance, he said, is an avenue to awaken the consciousness of the people. He noted that this would lead them to appreciate the freedom that they enjoy and to pursue the bright future for the country that the martyrs had earlier longed for.

In her opening remarks, Dr. Elena Pernia, UP vice president for public affairs, said that the two-day virtual learning event would remember the struggles and causes not only of those from UP, but also of those outside the university.

The inaugural session in the morning of Sept. 21, entitled “Hamon ng batas militar,” featured the talk of four UP alumni who looked back at their ordeals immediately before and during Martial Law.

Carol Pagaduan-Araullo, chair of Bagong Alyansang Makabayan and 1972 vice chair of the University Student Council, recalled that even before former President Ferdinand Marcos declared Martial Law on Sept. 21, 1972 through Proclamation No. 1081, many had already read through his actions and events that happened in the country.

“Nababasa na ng marami ang maitim na balakin na ito,” Araullo said, as she cited the suspension of the Writ of Habeas Corpus in 1971 as among these warnings.

She emphasized that many in the university had been determined to oppose it, citing the First Quarter Storm and the Diliman Commune in 1970 and 1971, respectively.

Fellow speaker Mamerto Calalang, then an activist high school student in Pampanga, noted the sudden absence of radio on air after Martial Law was declared.

Social studies teacher Maria Cristina Pargas-Bawagan, who has educated her students at the Philippine Science High School about Martial Law, narrated her Martial Law ordeals that even extends to her family. From her political awakening in high school at Maryknoll College, she became an activist at UP and was eventually detained.

She lost her husband, fellow activist Jun Quimpo, during Martial Law. Their siblings, both on the Quimpo and Pargas sides, were also detained and tortured, including her sister Etta Rosales, former chair of the Commission on Human Rights.

Directly helping political detainees to regain their freedom, meanwhile, became the advocacy of another speaker, Liza Acevedo-Ilagan, after graduating from UP in the early 1980s when she joined the Task Force Detainees of the Philippines in Baguio City.

Now a fine arts professor at UP Baguio, Ilagan admitted that she was at first hesitant to talk about her Martial Law ordeals. But upon realizing that her stories would testify to the cruelties of the said period, especially to the younger generations, she stepped forward.

The webinar series features three other sessions. These are “Detendido. Desaparecido” in the afternoon of Sept. 21; “Sining at panitik: daluyan ng tinig” and “Patungong People Power: turning points” on Sept. 22.

The two-day learning event, which is accessible on Zoom and on the TVUP Youtube channel and website, also features an online exhibit, protest performances, and messages from the chancellors of UP constituent universities.

The webinar is open to educators, students, and to those who wish to learn more about Martial Law. (Mark Jayson E. Gloria)