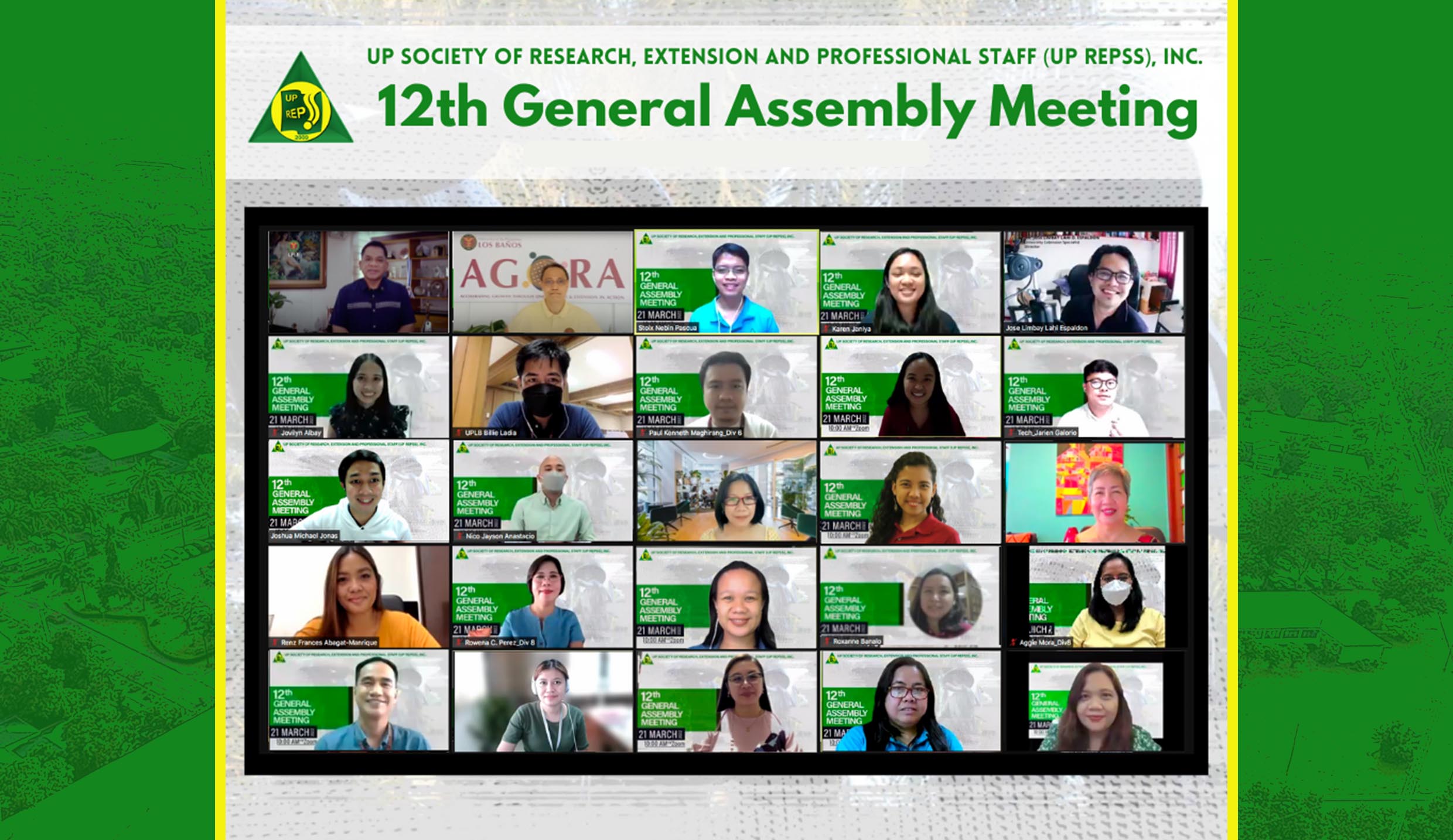 The UP Society of Research, Extension and Professional Staff (UP REPSS), Inc. held the organization’s 12th General Assembly Meeting at 10 a.m. on Monday, March 21, via virtual conferencing and live streaming.

The assembly was attended by around 200 members across departments, institutes, and colleges of the university.

At the beginning of the program, the attendees held a votation for the seven members of the UP REPSS Board of Trustees for 2022-2023.

In his opening remarks, Vice Chancellor for Research and Extension Nathaniel C. Bantayan mentioned that he himself began his professional journey in the university as a member of the REPS.

UPLB AGORA or Accelerating Growth through Research & Extension in Action is UPLB’s new unified research and extension agenda that was launched on March 7.

It envisions the university as an avenue for forming and exchanging ideas toward future-proofing research and extension in UPLB, therefore enhancing its global competitiveness while providing the Filipino people exceptional public service.

Dr. Bantayan said that he expected all REPS to be familiar with UPLB AGORA and contribute to knowledge generation and partake in activities that engage and empower the communities.

In a message delivered at the assembly, Chancellor Jose V. Camacho, Jr. said, “UP’s primary occupation as an institution of higher learning is to teach but the university’s duty to conduct research, extension, and public service are equally important.”

He said that as the national university, UP is not only a leader in higher education and development but is also mandated to serve the country as a research university and a public service university.

He ensured the UP REPSS of the administration’s support and assistance to advance the needs and concerns of their sector.

After the messages, Paul Kenneth B. Maghirang, election committee member of UP REPSS, convened the newly elected members of the Board of Trustees (BOT).

The BOT members are chosen from among the eleven divisions of the UP REPSS. While the board was in session in a breakout room to elect the new set of officers, the REPSS members presented song and dance numbers for everyone’s entertainment.

Director Espaldon discussed the different projects spearheaded by the group such as the “Publish Pa More” webinar on the publication process, tips, and strategies. He mentioned the participation of UP REPSS in the recently held selection of the new staff regent.

He said that despite the challenges brought about by the pandemic, which restricted face-to-face activities, UP REPSS was still able to maintain a strong community relationship among its members and remained proactive in providing assistance to disaster-stricken areas.

Director Espaldon also presented the streamlined membership process flow of the 313-strong UP REPSS and gave the financial report of the society.

He ended his report by presenting the proposed by-laws amendment to be turned over for the next board of trustees’ actions on it.

He also presented the certificates of service to the members of the UP REPSS Council across the eleven divisions and led in the oath taking of its 20 new members and presented the 2022-2021 Board of Trustees and Council Officers.

Valencia thanked the members for their trust and support and assured them of the new officers’ proactive pursuit of the organization’s thrusts.

She also thanked outgoing UP REPSS president Espaldon and assured him of the continuation of his programs and activities.

The assembly ended with a photo session by the different divisions and of the whole group. (Joshua Michael G. Jonas)