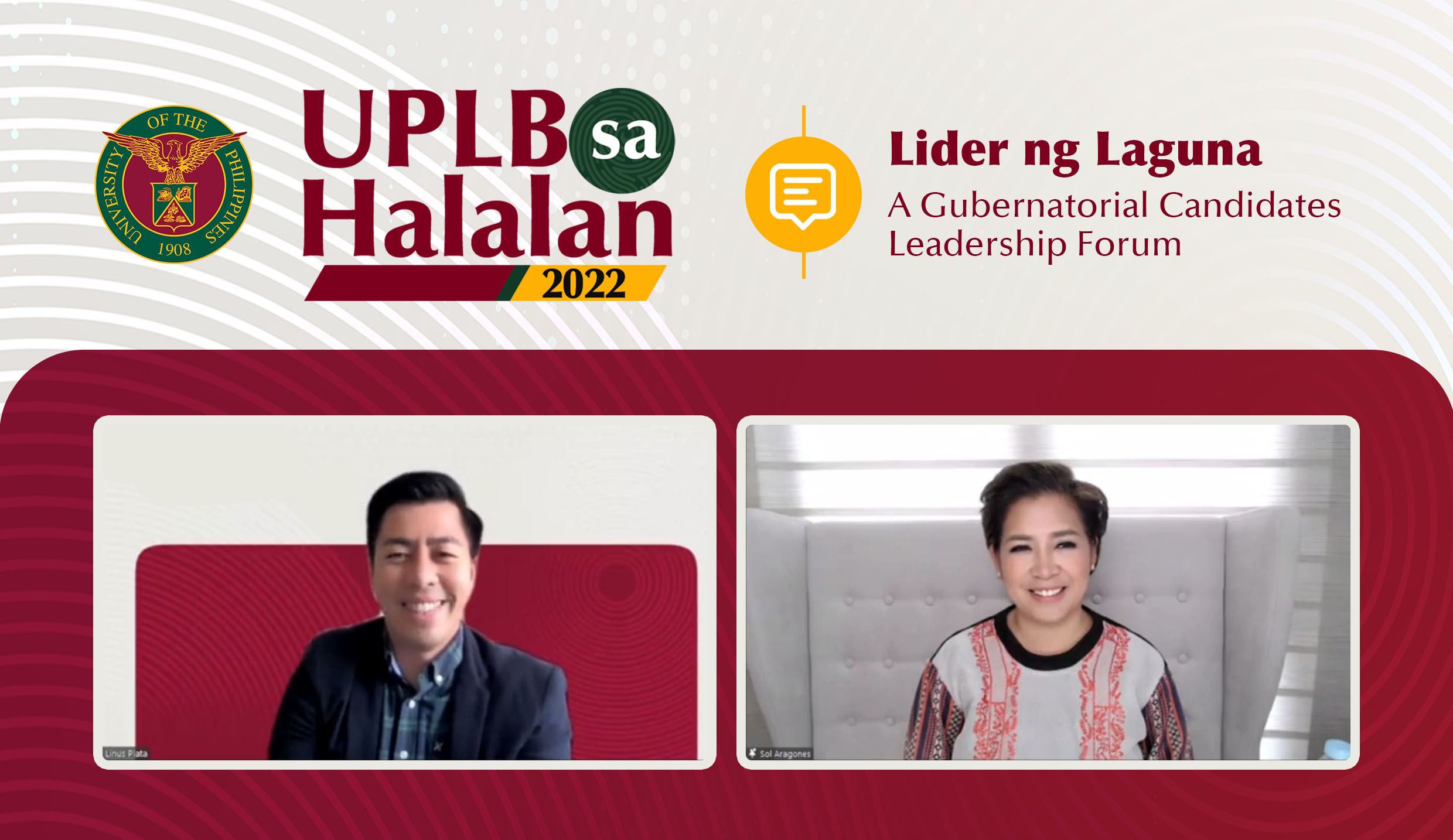 The UPLB sa Halalan 2022 spearheaded the “Lider ng Laguna: A Gubernatorial Candidates Leadership Forum” on April 27 at 9 am via video conferencing and Facebook live streaming.

Rep. Marisol “Sol” Aragones of the 3rd District of Laguna was the lone candidate who participated in the forum. Gov. Ramil Hernandez said he had a conflict in his schedule, and Berlene Alberto encountered technical difficulties on the day of the forum.

Dr. Benevieve Villanueva, assistant to the vice chancellor for community affairs and chair of the Ad Hoc Committee for UPLB sa Halalan 2022, opened the program by acknowledging Aragones for participating in the forum.

Director Mark Lester del Mundo Chico of the Office of Public Relations and co-chair of the ad hoc committee further explained the forum’s purpose as a public service activity of UP.

“It aims to provide a venue where we get to know the candidates, learn about the power of our votes, and reflect on our role as Filipinos in shaping our future,” Chico explained.

Aragones expressed gratitude to the organizers for the opportunity to share her plans and platform of government.

She addressed issues regarding communication infrastructure and telecommunications, forestry, e-sabong, disease monitoring, traffic, green and open spaces, job mismatch, occupational safety, and plastic usage. She pointed out the need to consult experts on these for fact-based decision-making.

She discussed her plans to establish a help desk in every barangay for young children and adolescents with little to no support system and hold monthly sectoral dialogues to strengthen the involvement of communities.

According to Aragones, she plans to augment funding for schools to help provide quality education and ensure the safety of students in face-to-face classes. She highlighted the importance of mental health and the well-being of students and teachers in the new normal.

Aragones also said that she will tap funds to help public and private teachers with local subsidies and promised to increase the social pension of senior citizens from PhP500 to Php1,000.

Her top priority during her first 100 days as governor is to talk to people and familiarize herself with the needs and problems of each sector.

One of these problems, she said, is health, thus her plan to build a well-equipped tertiary hospital that will benefit all sectors.

Aragones discussed her other programs, such as the provision of scholarships to children of solo parents that should be more inclusive: not based on grades, but on the needs of the students.

She also expressed condemnation of fake news and said there is no room for it under her leadership.

Aragones said that transparency in handling funds would be prioritized because it involves the people’s money.

She promised to continue the current administration’s good projects and programs and host more projects to develop tourism, culture, arts, and sports.

In her final message, Aragones expressed gratitude and appreciation to those who supported her, especially the women.

She said that the citizens’ votes will determine the future of Laguna and called on the Lagunenses to allow her to serve the province.

Vice Chancellor for Community Affairs Roberto Cereno closed the program by thanking Aragones and the forum participants, which he said covered almost all of the sectors in Laguna.

Moderated by Linus Van Plata of the Department of Humanities, the gubernatorial leadership forum may be viewed on the official UPLB Facebook Page. (Kyle Ramiel Dalangin)