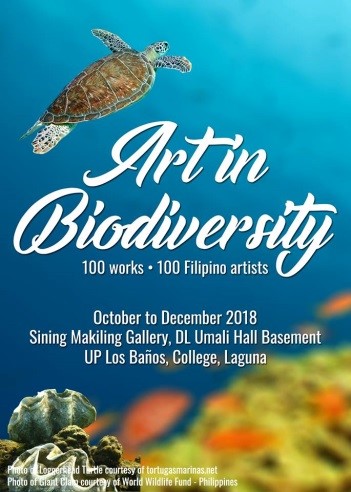 Festive and critical is UPLB’s yearender exhibit “Art in Biodiversity”.

Exploring a wide range of mediums, styles and techniques, the group show brings together a select group of painters, sculptors, and mixed-media artists. It is a fitting tribute to UPLB on its 100th Loyalty celebration.

Most of the featured works are hinged on conservation as the raison d’être of biodiversity. Highlighted are flora and fauna that are rather peculiar in the country and the Southeast Asian region. Endemicity, one of the hallmarks of biodiversity, becomes a rallying point in the exhibit.

A few artists, however, dare to trek another equally important aspect of biodiversity: endangerment. Its urgency is evident in our quest for survival in the midst of finite resources available. This is biodiversity’s critical turn.

The artists’ pieces are a tapestry of visual communication, and viewers decode their meanings in more ways one could possibly imagine.

Hopefully, “Art in Biodiversity” would succeed not only in creating a platform for the celebration of biodiversity, but also in stirring public consciousness on its endangerment.