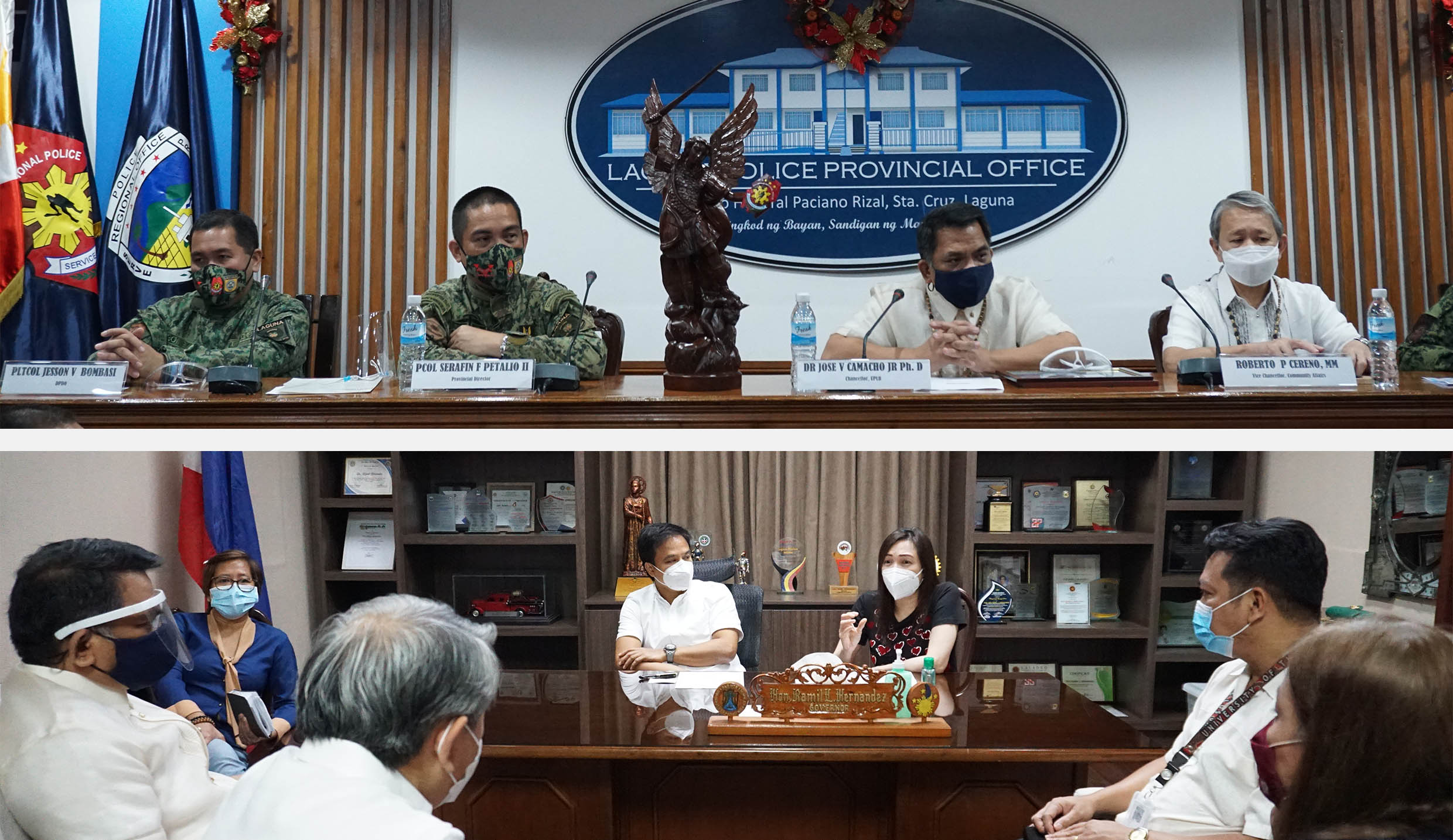 UPLB continues to maintain its strong community relations at the provincial level with the visit of Chancellor Jose V. Camacho, Jr. on Jan. 28 to two government offices in the Province of Laguna.

As a proactive stance, Chancellor Camacho and his team discussed with the said offices future projects that will uphold the welfare of and academic freedom in the university, ensure the safety and security of the UPLB constituents and the surrounding communities in the campus, and expand the university’s off-campus graduate programs.

Planned road projects that are envisioned to benefit the villages in Brgy. Tuntungin-Putho and Brgy. Bagong Silang were discussed in UPLB officials’ discussion with Governor Hernandez and Representative Mariano-Hernandez. They pointed out the socio-economic and the ecological impacts of these infrastructure projects, and agreed to further discuss these matters at the UP System-level.

Chancellor Camacho and his team also proposed road and bridge projects that could improve the mobility of the UPLB constituents and the residents of surrounding barangays to and from the campus.

At the Sta. Cruz visit, both UPLB and LPPO expressed their mutual aim for peace in the community. They explored the ways by which they can work together in maintaining the safety and security not only of the campus, but of the surrounding settlements and the UPLB-maintained Mount Makiling Forest Reserve.

Among the possible activities is the further implementation of the “UPLB Ko, Bantay Ko”  Program, a security summit that UPLB spearheaded in 2012 to provide students and staff with proper information and training in security. This endeavor has earlier included the Los Baños Municipal Police Station (MPS) and Local Government Unit (LGU).

Also included in the potential knowledge sharing activities between the two are LPPO’s trainings and seminars for the UPF to enhance its capability in investigation, arrest, and drug awareness; and UPLB’s short lectures for LPPO staff on report writing and communication, statistics, and research.

UPLB also encouraged the officers and staff of LPPO to pursue the off-campus graduate programs of UPLB, particularly the Master in Public Affairs and Master of Development Management and Governance. Like the other government and private organizations that partnered with UPLB in off-campus programs, the classes under this learning mode are held outside the UPLB campus. Usually, classes are conducted in the respective physical office of the students.

UPLB and LPPO also acknowledged the existing gasoline ration that the university has been providing the Los Baños MPS, as well as the adjacent Sangguniang Barangays, for the past years to help the university in the nightly patrolling of the communities surrounding UPLB and for them to be on call and to respond to emergency situations in the university without delay.