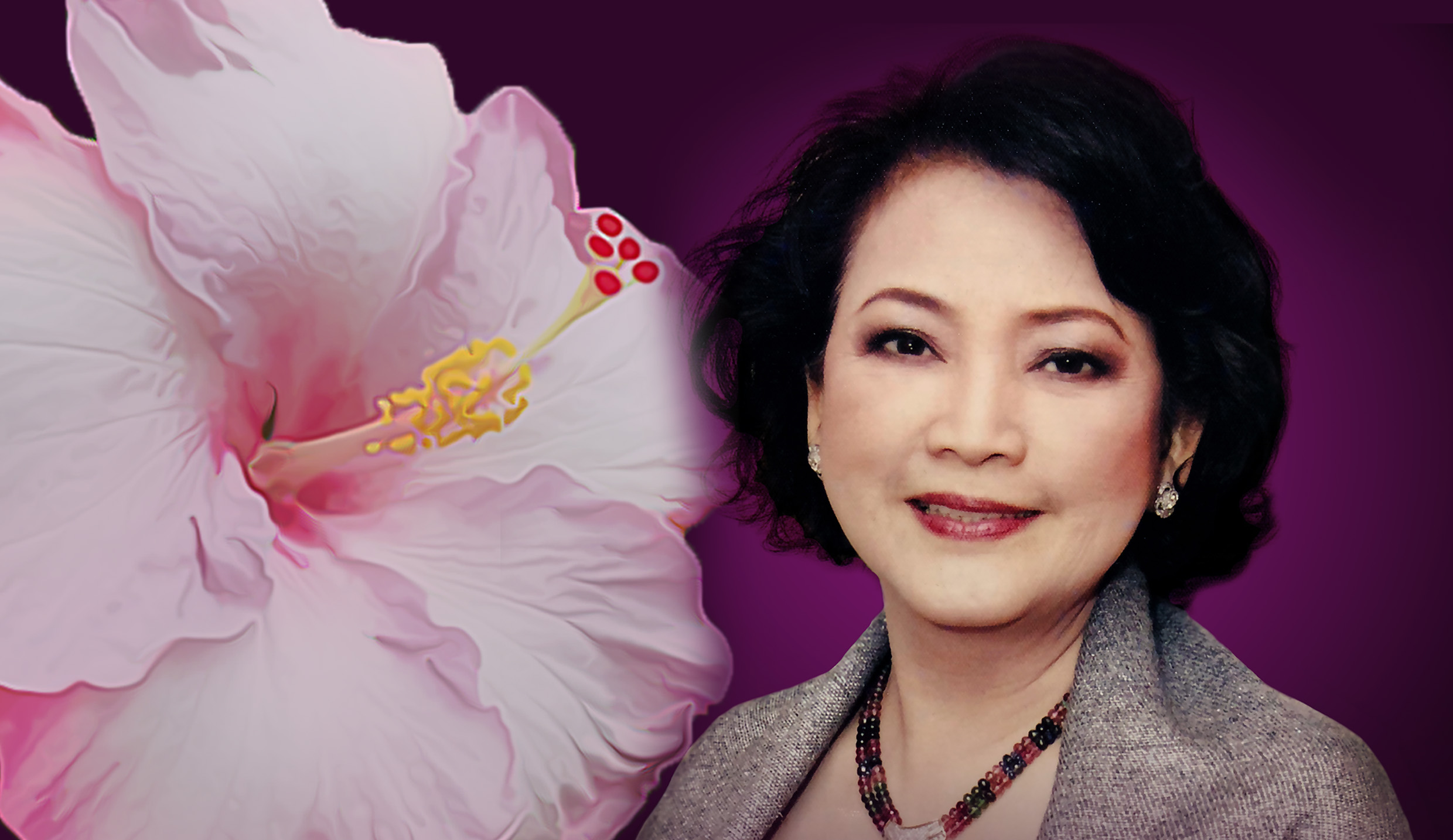 Another Hibiscus variety was named after an esteemed woman for her work in the area of public service.

An artist and an advocate for women and the marginalized sectors, Mrs. Carmen Martinez-Pascual is the latest addition to the august roster of accomplished women who unstintingly served their community.

The Hibiscus rosa-sinensis ‘Carmen Martinez-Pascual’ was officially launched on Oct. 29 via zoom video conference. The virtual program was attended by the awardee herself joined by her husband, former UP System President Alfredo E. Pascual.

Hibiscus rosa-sinensis ‘Carmen M. Pascual’ is a simple and solitary flower that has bluish purple petals with a rhodonite red eye and white vein markings radiating from the eye going to the petals.

The plant is semi-spreading, prolific, shrubby with a semi-erect growth habit. It is a fast grower on its own root and has intermediate resistance to major insect pests and diseases.

Described as an artist and advocate for women and the marginalized, Martinez-Pascual was likened by Chancellor Fernando C. Sanchez, Jr. to the flower for her strong advocacy to her causes.

Martinez-Pascual worked for the advancement of the status of women and the upliftment of the marginalized through various organizations and civic engagement, as well as through the promotion of the arts.

She was president of the Asian Development Bank Spouses’ Association (ADBSA) in 1999 and vice president in 1998, president of Zonta Club of Manila I, from 2004 to 2006,

She was president of the Ladies of Charity of the Christ the King Parish in Greenmeadows, Quezon City from 2009 to 2012, and president of the Philippine Association of University Women of UP Chapter from 2011 to 2017. These organizations provided scholarships, conducted activities to help eradicate poverty, provided health care and nutrition services, and held activities to protect the welfare of women, children, and elderly.

Martinez-Pascual is a visual artist who has held several art exhibits since 2006 and served as vice president of the UP College of Fine Arts Alumni Foundation since 2011.

The Hibiscus-rosa sinensis Carmen Martinez-Pascual is a novel color with a beauty that signifies her as someone with an extraordinary heart for the less fortunate. The turkey red eye in the flower represents her passion for taking the lead in socio-cultural, charitable, and civic organizations activities. The flower’s tricolor trait symbolizes her international exposure in her art exhibits and collaborations. Dubbed as the ‘Queen of Philippine gardens, the hibiscus hybrid flower was developed by Professor and UP Scientist, Dr. Pablito Magdalita, of the Institute of Crop Science, College of Agriculture and Food Science (CAFS).

Martinez Pascual, in her acceptance message, said she has never imagined that a flowering plant would be bearing her name and that she was glad that UPLB has given her the honor based on her life of leadership and service as a UP alumna.

“Indeed, serving others gives me a sense of fulfillment as I continue enjoying my friends and family.” She said. “People say the gumamela is valuable for its various uses. To the children, gumamela leaves and flowers are used for making bubbles. To the sick, gumamela has a wide range of healing effects. To me, the gumamela will now be a reminder for us mothers, artists,  advocates, and volunteers to persist in living a life of purpose as committed women touching the lives of others and bringing positive change, one brush stroke at a time.”

For 26 years, UPLB has been upholding the tradition of developing and naming of the hibiscus hybrids after well-deserved Filipinas. To have a hibiscus rosa-sinensis under one’s name means joining the roster of well-respected heroines, women academicians and national scientists, accomplished actresses in the Philippine cinema, artists, public servants, and leaders.(KEAraguas with information from ICS, CAFS)