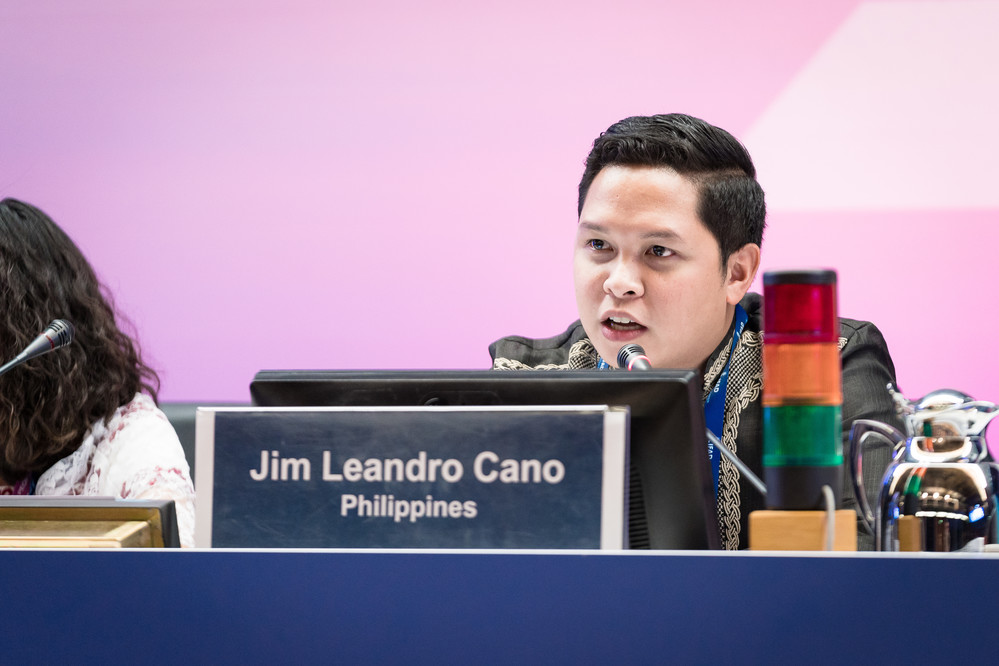 Jim Leandro P. Cano, a UPLB student taking MS Development Management and Governance, represented the Philippines at the 42nd Governing Council of the International Fund for Agricultural Development (IFAD) of the United Nations on Feb. 14-15.

Cano, the country representative of the Young Professionals for Agricultural Development (YPARD), presented success stories of youth-led initiatives of YPARD Philippines that have tapped funding for start-up business or to access markets abroad for agricultural services.

Among these success stories are Dream Agritech of Joseph Dakila Olfindo, a BSA Horticulture graduate of the UPLB College of Agriculture and Food Science (CAFS), who partnered with an OFW group in Dubai to provide advisory services for reintegrating OFWs through the establishment of farms in the Philippines.

Cano also presented Urban Agriculture PH of Earwin Belen, a BSA Soil Science graduate of CAFS. The project won the top change prototype and seed funding among 19 projects in the Future Bridging Leaders Program of the Asian Institute of Management (AIM) and TeaM Energy Foundation, a community-supported agriculture model connecting to barangay local government units and the Department of Agriculture.

Another project that Cano presented was e-Magsasaka of Gorby Dimalanta, an MS Innovation and Business alumnus of AIM. e-Magsasaka is a start-up that has benefited from the mentoring program of Makesense Philippines.

Cano summarized the key factors that were salient in these stories. First is the importance of creating an enabling environment where policies are in place to support the growth and development of youth-led agricultural enterprises such as funding and relaxed policies in accessing grants and loans.

Second is providing of both seed funding and mentoring, as funding alone may not be sustainable without the latter.

At the presentation were dignitaries, such as Pope Francis, Midori UN Messenger of Peace, the President of the Dominican Republic, IFAD governors, and the permanent representatives of the UN member states to the Rome-based agency.

The Governing Council is IFAD’s highest decision-making body. For its meeting this year, it partnered with the International Agri-Food Network (IAFN) to organize the panel discussion on Access to Finance for Young People.

This is in line with the thrust of IFAD to focus on mainstreaming youth into their programs and projects around the world as reflected in their recently approved IFAD Rural Youth Action Plan 2019-2021.

The panel discussion aimed to challenge conventional views on youth and offer young people a platform to share their own unique perspectives and solutions to systemic challenges such as financial access and inclusion, land tenure, access to markets and education.

YPARD is an international network that advocates and promotes stronger engagement of youth in agriculture. It is hosted by the Global Forum for Agriculture Research (GFAR) at the Food and Agriculture Organization of the United Nations (FAO), Rome, Italy.

Cano is a teaching associate at UPLB CAFS, where he also earned his BS Agriculture degree. With him at the IFAD meeting were three youth representatives from Cameroon, Kenya, and Mexico.

You can watch the video of the panel discussion at https://youtu.be/xkJSt5NXSK4.