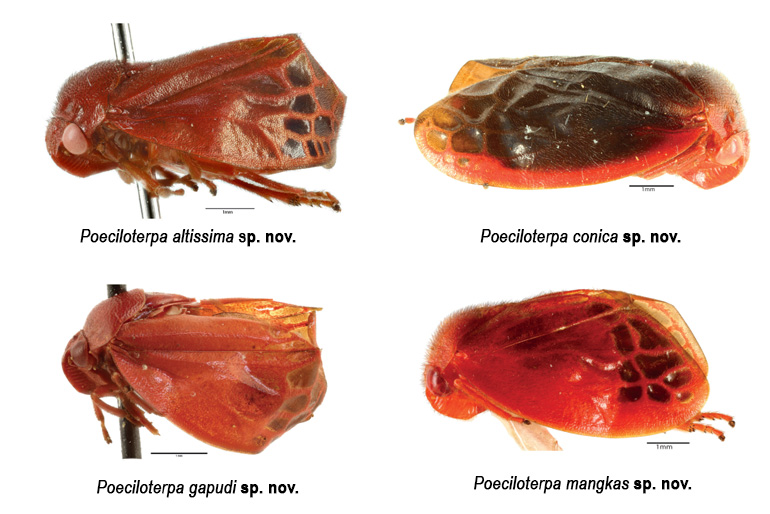 If you are a curious outdoors person, you may at least once have come across frothy slime smeared on vegetation. Your first thought may have been, “Gross! How could anyone spit around so carelessly?”

But the chances of you touching another persons’ sputum even on a hike are quite small. That ‘spit’ you were shaking off your hand could be the secretion of a sap-feeding cercopid called a froghopper.

“Cercopids are a big family of tiny hemipterans, an insect group which has wings that are part tough and hard, part membranous,” explains Dr. Sheryl A. Yap, curator at the UPLB Museum of Natural History (UPLB-MNH).

“Adult froghoppers can jump high and far, many times their height and length. Hence, the reference to their common name,” describes Yap, who is also director of the UPLB Institute of Weed Science, Entomology and Plant Pathology .

“But one notable thing about froghoppers is that their nymphs, also called ‘spittlebugs,’ produce a spit-like substance, which is likely what you had accidentally touched in the field. But, of course, it’s possible it could be someone’s spit after all,” she said in jest.

The foam is not actually spittle, but a sticky bubbly mass produced by the froghopper nymphs by pumping air from their abdomen into the urine they have just expelled. Scientists say the spittlebugs cover themselves with the froth as some form of protection against predators and extreme temperatures.

The family Cercopidae has around 1,500 species that have been named and described but studies indicate that the group is still one of the most neglected and unexplored. In the Philippines, 67 species of cercopids, belonging to 18 genera, have been found. Some of these genera are endemic to the country.

“The genus Poeciloterpa Stål, 1870, which is the focus of our work, has been found only in the islands of Luzon, Mindanao, Negros, Panay, and Polillo,” Elorde Crispolon, Jr., one of Yap’s graduate mentees, said.

Crispolon and Yap, who collaborated with Adeline Soulier-Perkins of the Paris-based Museum National d’Histoire Naturelle to review the list of froghoppers belonging to Poeciloterpa, have been able to describe four new species.

“We went on collection trips, as well as inspected very old collections, even those collected nearly a century ago by former UP College of Agriculture Dean Charles Baker,” lead author Crispolon explained via email. Their group also looked at important collections in museums in Poland, France, United Kingdom, Sweden, and Germany.

P. gapudi is named after Dr. Victor P. Gapud, a renowned Filipino entomologist and taxonomist and former director of the UPLB Museum of Natural History (MNH). “The holotype material, incidentally, was collected by Dr. Stephen G. Reyes, also a former director of the MNH, at Mt. Kitanglad in May 1984,” Dr. Yap explains.

The species was named after Gapud in recognition of his great contributions in describing the Philippine entomofauna. (Florante Cruz)