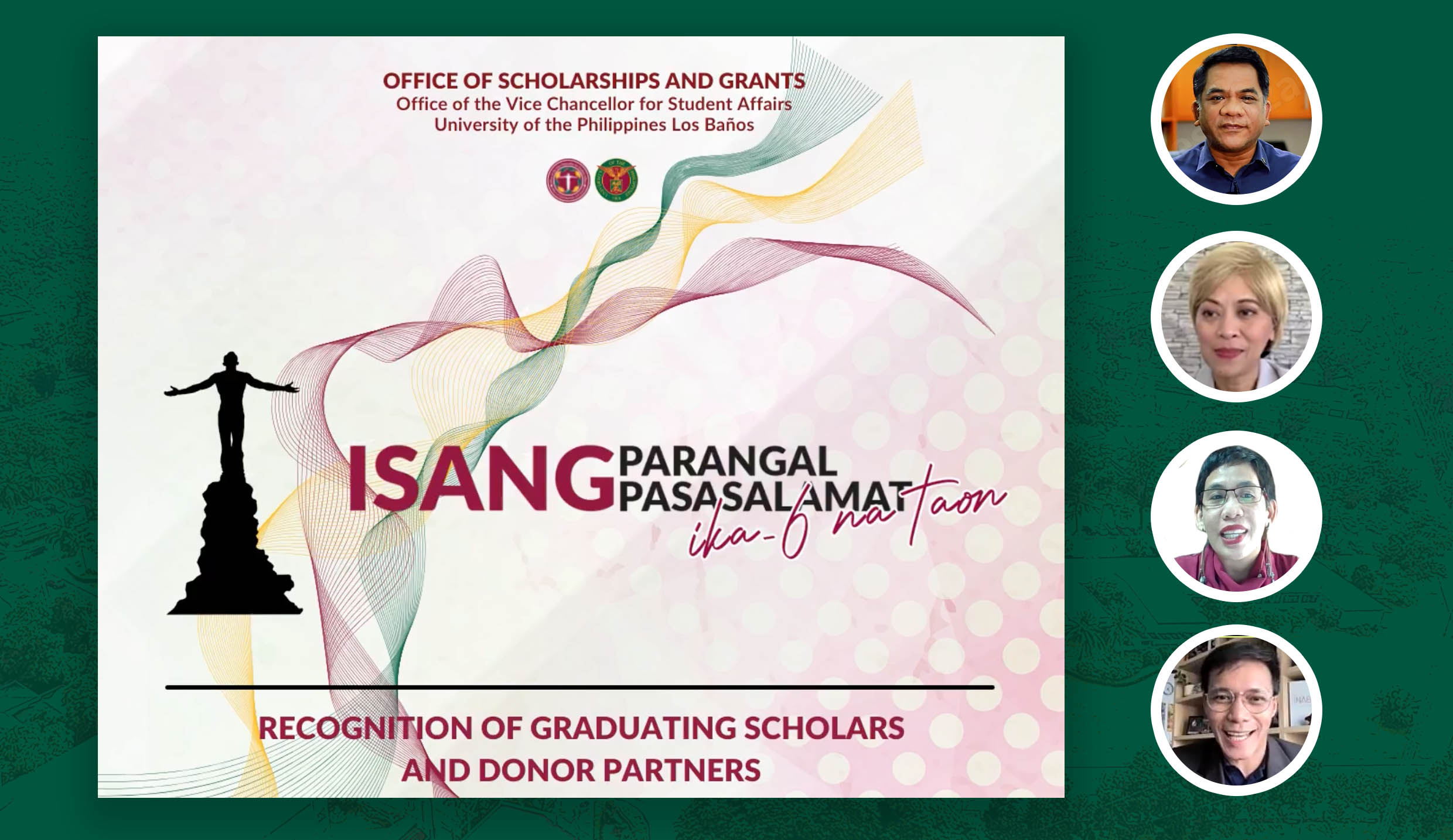 In her opening remarks, Dr. Janette H. Malata-Silva, vice chancellor for student affairs, extended her sincerest appreciation to the organizers of the ceremony and to all who attended.

“The current struggles we face made this event more meaningful,” she said, explaining that by pointing this out, the intention was not to glamourize the pandemic but to honor the people who made the event possible despite the situation.

Dr. Jean O. Loyola, vice chancellor for academic affairs, welcomed everyone to the ceremony and thanked UPLB OSG for organizing the event.

She agreed that it is important to recognize the donors as she expressed her sincerest gratitude for their continued support, not just financially, but also for the camaraderie, respect, opportunities, and experiences, they have provided the scholars.

She congratulated the scholars for pressing forward and succeeding despite the extremely difficult times, and called them true-blooded maroons.

Dr. Loyola finished her welcoming message with a reminder to the scholars to serve the country, the nation, and their fellow Filipinos.

Chancellor Jose V. Camacho Jr., the first keynote speaker, extended his heartfelt congratulations to scholars for “reaching that long-sought milestone that is graduation.”

He reminisced about his own graduation, being a product of an undergraduate scholarship in UPLB, the Agricultural and Rural Development Scholarship (ARDS).

He said that he is forever grateful to his scholarship for changing his life for the better.

He gave words of commendation to the graduates from the standpoint of the current situation of the COVID-19 pandemic. “With all that have gone on and all that we have experienced in the past year and half, the most important lesson we can take from it is the value of persistence and determination,” he said.

He said that the students pushed on, persevered, and gave their absolute best despite everything that has been going on, as such, earning for them his respect and admiration.

Chancellor Camacho offered his thanks to the donors for their continued support even though the pandemic took a toll on their organizations.

He expressed renewed commitment to the partnership with them and urged them to “continue helping one another to help others for more decades to come.”

He ended his speech by encouraging the scholars to keep on pushing so that they themselves can seize their own future.

Following Chancellor Camacho as keynote speaker was UP Assistant Vice President (AVP) for Academic Affairs (Student Affairs) Richard Philip A. Gonzalo, who is also a faculty member at the UP Asian Institute of Tourism and director of the UP Office of Student Financial Assistance.

Assistant Professor Gonzalo acknowledged the contribution of the Office of the Vice Chancellor for Student Affairs (OVCSA) in ensuring that the students of UPLB can safely continue with their academic requirements. He furthered that its programs play a big part in supporting the students so that they can safely continue with their advocacies and reach for their dreams despite the pandemic.

On behalf of the UP System, he expressed his gratitude to the donors and partners behind the scholarship programs.

(Times are challenging, however your care and love cannot be bargained with for them to reach their dreams.)

AVP Gonzalo explained that the students’ time in the university is not only a chance to hone their skills, but is also an opportunity for them to stand up for what they believe in.

(As you continue in your journey, do not forget the principles that shaped you as a scholar of the nation.)

Angel recalled his life as an undergraduate student who was struggling financially and attributed this to his desire to be a donor.

(Because I know that there is a reason I was given a good life; that maybe helping the students like me then was one of the reasons.)

Lopez thanked all the donors and the OVCSA for giving him the chance to come as far as he has. He encouraged everyone to give others the same opportunity saying, “together we can build our nation towards the progress that we all achieve, and we all want to achieve in the future.” (Sebastian Alfonso S. Fresnoza)