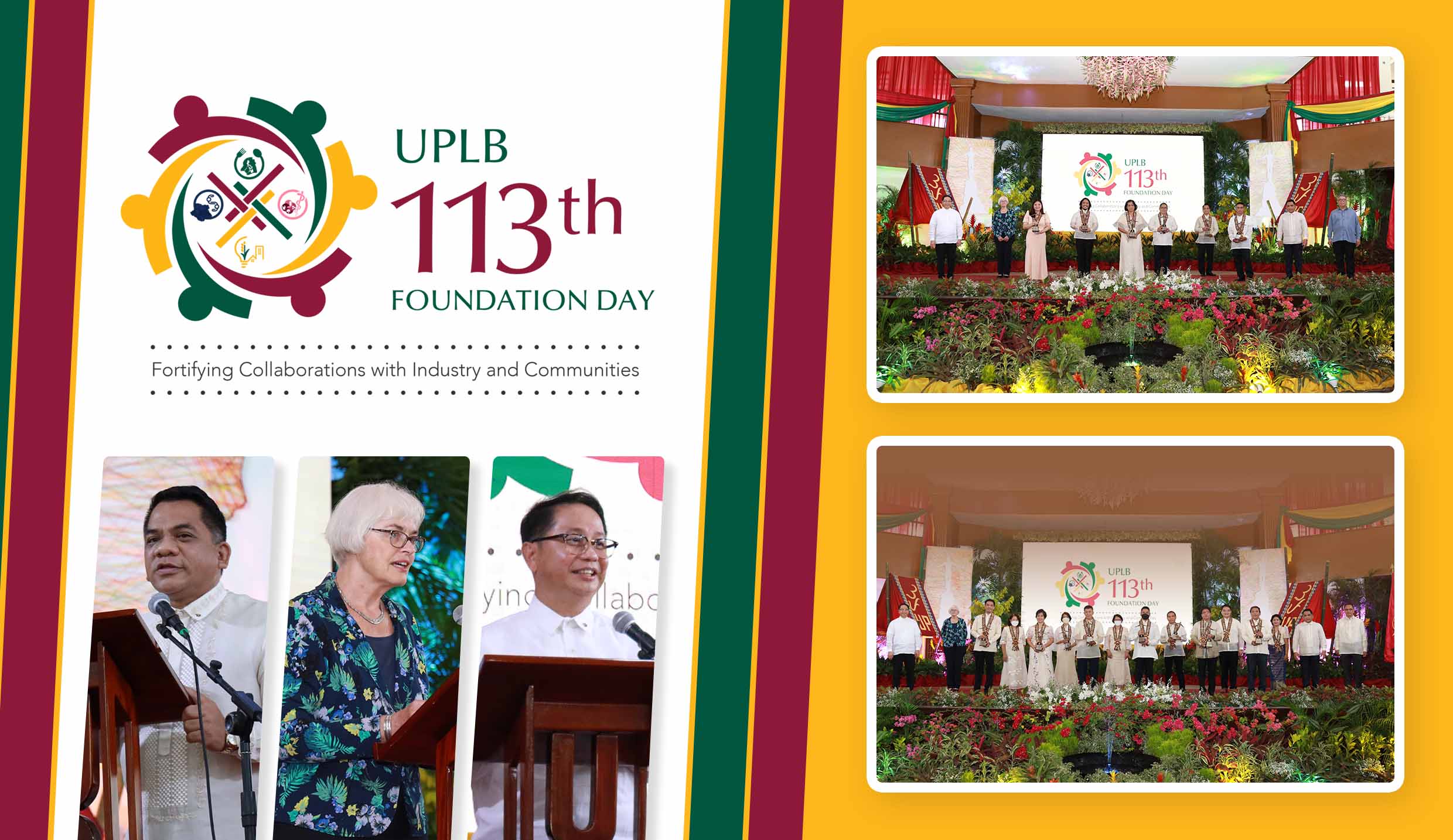 UPLB celebrated its 113th Foundation Day by recognizing its retiring and outstanding personnel. Twelve individuals and 2 research and extension teams from the university’s administrative, faculty, and research and extension personnel were recognized in the awarding ceremony. UPLB also honored 355 retiring personnel, many of whom had served the university for decades. The special ceremony was held at Baker Hall on Mar. 4 and broadcasted on UPLB’s social media account.

Her Excellency Saskia de Lang, ambassador of the Kingdom of the Netherlands to the Philippines, served as the guest speaker.

Dr. Randolph B. Trinidad, the 2022 UPLB Outstanding Administrative Personnel (professional personnel category) awardee, responded on behalf of the awardees and underscored the values of selflessness, sacrifice, and love among his fellow university personnel.

Trinidad shared stories to the audience about the personal sacrifices and challenges that many university personnel had to face to continue serving in the line of duty.  He encouraged them to use adversity to keep growing and learning.

“Embrace and utilize those values for you to transform into a better version of yourself. The world is constantly changing, and so are we! So, let’s keep on reinventing ourselves,” he continued.

In his welcoming remarks, Chancellor Jose V. Camacho, Jr. spoke about the theme of UPLB’s Foundation Day celebration, “Fortifying Collaborations with Industry and Communities,” where he emphasized the importance of collaboration in future-proofing UPLB.

“Collaboration is the backbone of future-proofing. If there is one lesson that the world must have learned from this pandemic, it is that through collaboration we can achieve things that were thought impossible,” he said.

He mentioned UPLB’s future-proofing initiatives such as the “Accelerating Growth through One Research and Extension in Action” (UPLB AGORA) extension and research agenda, and the establishment of the UPLB Agro-Industrial Park and Information Technology Park, which he said aim to open more opportunities for collaboration among the University and its partners.

UP President Danilo L. Concepcion also gave his message to the UPLB community and recognized UPLB’s role in producing professionals who have contributed to progress and development in various fields globally.

(“They have been instrumental in the spread of new perspectives on agricultural management and science which are at the heart of modernization. Public service and national development are immediately undertaken by those who graduate and work at UPLB.”)

In her message, Dutch Ambassador Saskia de Lang spoke about the partnerships that UPLB has had with the Kingdom of the Netherlands, among them Dutch academic exchange programs, the Institute of Plant Breeding’s (IPB) collaboration with the Dutch company East-West seed, and the Dairy Training and Research Institute’s partnership with FrieslandCampina or Alaska Milk Corporation.

She expressed the Kingdom of the Netherlands’ support and willingness for the continued partnership with UPLB in contributing toward achieving the sustainable development goals, particularly in food security, sustainability, and innovation.

“Together let’s make the Philippines and the world a more sustainable, a more resilient, a more livable and a better place,” she ended.

Ambassador de Lang is also the recipient of the Hibiscus rosa-sinensis “Saskia de Lang” which is part of the IPB gumamela “Women in Diplomacy” series.

UPLB is celebrating its foundation day 113 years since it was established as the UP College of Agriculture on March 6, 1909. (Jessa Jael S. Arana)