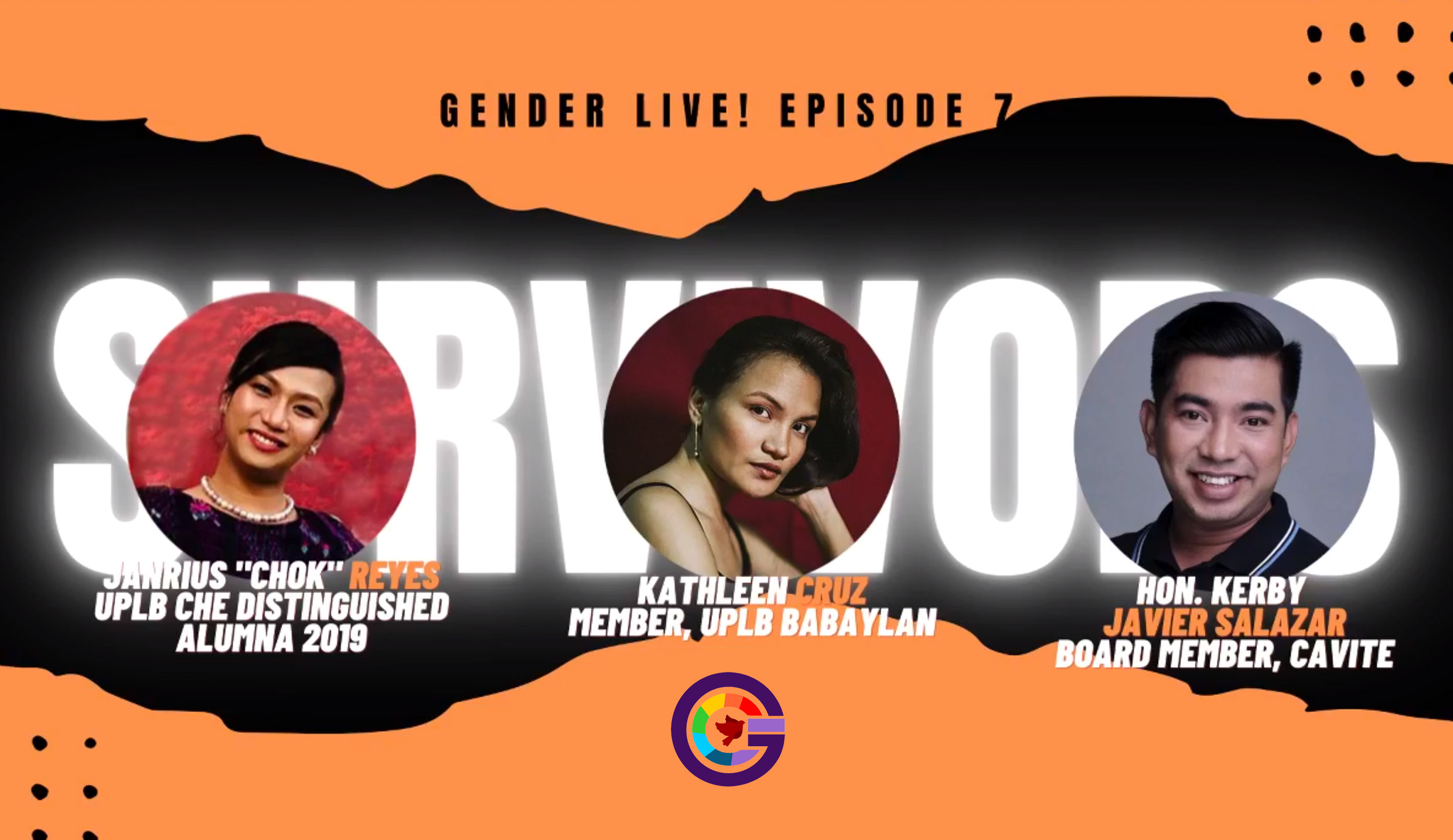 The UPLB Gender Center’s GendER sessions officially wrapped up its season with the 7th episode telling about stories of survival.

Featuring three speakers, Kerby Salazar, board member in the Province of Cavite; Kathleen Cruz, a member of the UPLB Babaylan; and Janrius “Chok” Reyes, a recipient of the Distinguished UPLB Alumna Award, the final episode showed different experiences of discrimination, harassment, and how the guest speakers were able to overcome it.

Board Member Kerby Salazar shared her experiences of discrimination as an openly gay man in public service in the provincial government of Cavite.

She pointed out that sexual orientation remains a big issue especially during elections, that at one point she was discouraged from running for the fear that the public is not yet ready to having an openly gay leader.

She said that she wanted to quit at one point but changed her mind when she realized that this is what she has been fighting for even as a student leader.

She was reminded that by staying true to her core, she would be able to open doors of opportunities for everyone regardless of gender.

Salazar expressed her hopes that these stories would help those who experience discrimination and encouraged the LGBTQ sector, saying that it is discrimination that motivated many among them to succeed because of the constant need to prove themselves worthy.

Kathleen Cruz experienced harassment and sexual assault during her younger years as a freshman in UPLB.

Cruz said that she kept the experience a secret for years and suffered from low self-esteem because of it.

She later realized that it is never ever the victim’s fault, even though people pointed out that it happened due to her vulnerability. When she finally decided to speak about it last year, she received a lot of support many of which came from victims like her.

Cruz added that the moment she shared her story, she knew that she had a responsibility to empower victims, women, children, and especially young students in UPLB to fight back,.

Janrius “Chok” Reyes shared her experience of discrimination during her time in the academe and even as an employee.

Reyes recalls that back in 2009, while in the process of joining an organization in the university, her application process was stopped because the organization got worried about the image and influence that she can bring into the group if they will accept her application.

As a job applicant, she experienced how prospective employers discriminated her for her sexual orientation.

She also experienced being addressed as a man even if her looks clearly showed that she is a transgender woman.

Reyes encouraged her fellow LGBT members to speak up when discriminated, to bank on their strengths and assets, and to talk about the challenge and face it head on.

She said that discrimination is the worst experience, but that it has strengthened her: because of it she could be placed anywhere, and still thrive.

Atty. Eric Paul Peralta, director of the UPLB Gender Center, served as the moderator while Nepthaly Botor gave the synthesis for the event. Both Peralta and Botor are faculty members at the College of Human Ecology.

The last episode of the UPLB GC series was viewed over 1000 times on UPLB GC’s Facebook page with audiences coming from all over the country. (KEAraguas)