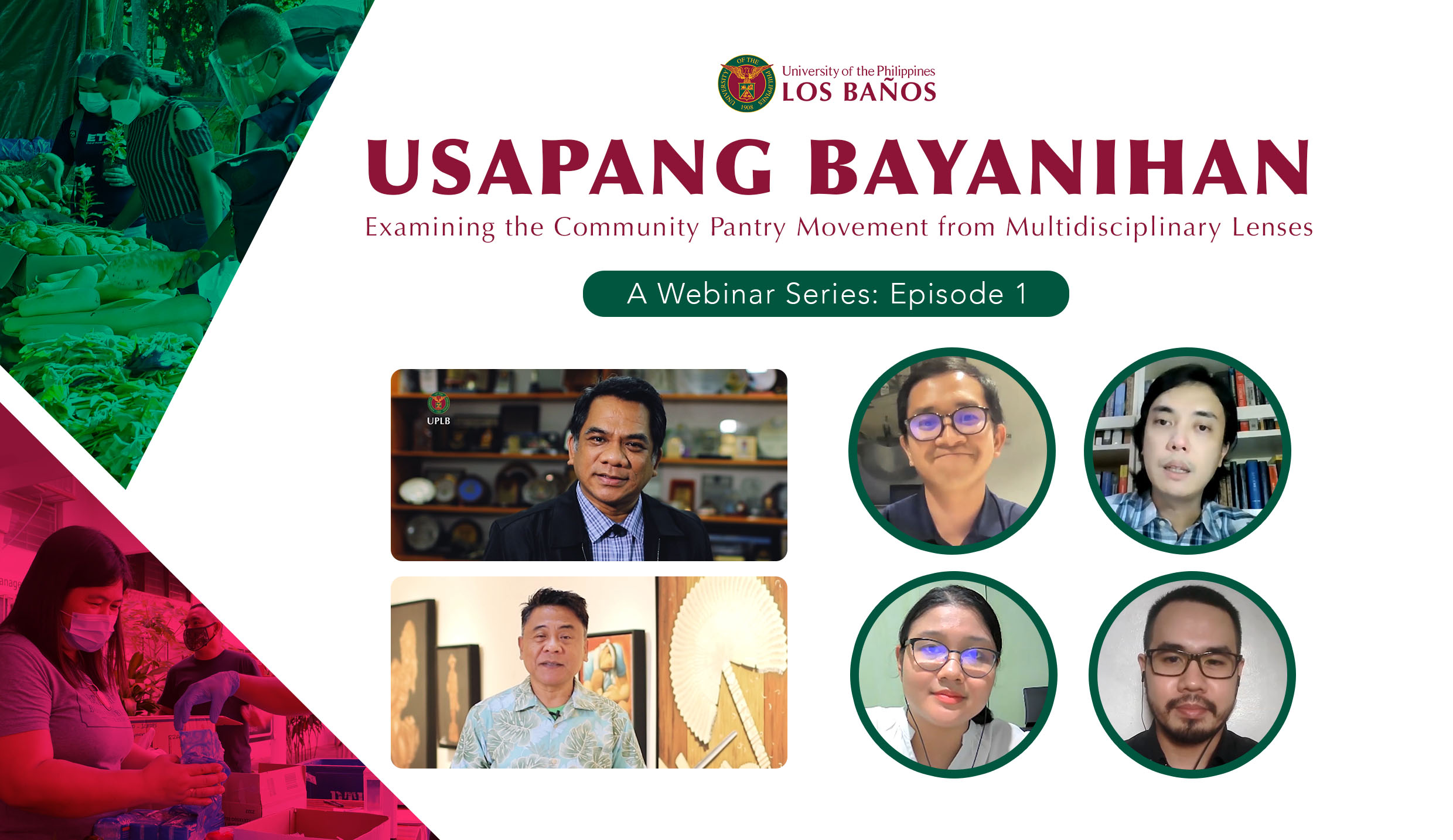 UPLB launched a webinar series on “Usapang Bayanihan: Examining the Community Pantry Movement from Multidisciplinary Lenses”  on May 8.

The webinar aims to provide a broad and holistic perspective on the emerging bayanihan spirit manifested in community pantry with speakers coming from various academic units and disciplines.

The first webinar had two talks. The first, titled “Community Pantry: The Economics Behind a Simple Solution to Ease a Massive Problem,” was tackled by Jefferson A. Arapoc, a faculty member at the Department of Economics of the College of Economics and Management (DE-CEM).

The second talk was on “Cracking the Crisis Narrative: The Political Significance of the Community Pantry” with Lara Gianina S. Reyes, a faculty member at the Department of Social Sciences of the College of Arts and Sciences (DSS-CAS).

Director Jerry Yapo of the Office for Initiatives in Culture and the Arts reiterated in his opening message the guiding principle behind the community pantries and how these community pantries serve and help the marginalized sectors in times of crisis.

He also expressed his hopes that the webinar series would help people understand the community pantry not only as a phenomenon, but also as a lived experience, a manifestation of the Filipino’s sense of communitarian spirit, and a necessary intervention or advocacy.

In his message, Chancellor Jose V. Camacho, Jr. asserted that it is appropriate for UP as an academic institution to examine the phenomenon of community pantries not only at face value but also through scholarly perspectives.

He also said that the webinar will examine the community pantry phenomenon through different lenses and academic disciplines to gain a deeper understanding of the reasons they emerged and became controversial.

In his talk, Arapoc discussed the Pitik Test (Presyo, Kita, Trabaho) in order to contextualize the impact of the COVID-19 pandemic in the Philippines. He also presented the key economic indicators during the pandemic such as inflation rate, unemployment rate, and real GDP growth rate.

Arapoc said that due to the health crisis, his team recorded new all-time highs and lows in the economic indicators. He said that they recorded the worst GDP contraction since World War II at -9.57%,  the highest unemployment rate since 2004 with 1 out of 10 Filipinos unemployed. The inflation rate, Arapoc further said, is higher than the target set by the Bangko Sentral ng Pilipinas.

Arapoc also mentioned that the COVID-19 pandemic health crisis is a classic case of market failure because of the insufficient distribution of goods and services.

For her part, Reyes tackled the politics in the context of COVID-19 in the Philippines. She further explained the prevailing public concerns such as lack of central leadership and an uncoordinated and overall poor pandemic response.

Reyes emphasized that the community pantries took place in the preservation of lives and livelihoods during this time. The pantry’s slogan, “Magbigay ayon sa kakayahan, kumuha batay sa pangangailangan” is grounded on the principles of social solidarity and reciprocity, Reyes said.

She further said that this act of kindness has, however, become subject to red-tagging because the community pantry is a potential catalyst to erode the administration’s narrative of the crisis.

Closing the program, Dr. Roderick C. Javar from the Division of History, DSS-CAS expressed his hopes that the webinar series will be added to the chorus of calls to the government to effectively address the pandemic and its complex problems.

This webinar  can be viewed at https://www.youtube.com/watch?v=FfBBTq1oR_M.(Angelica S. Sunga)