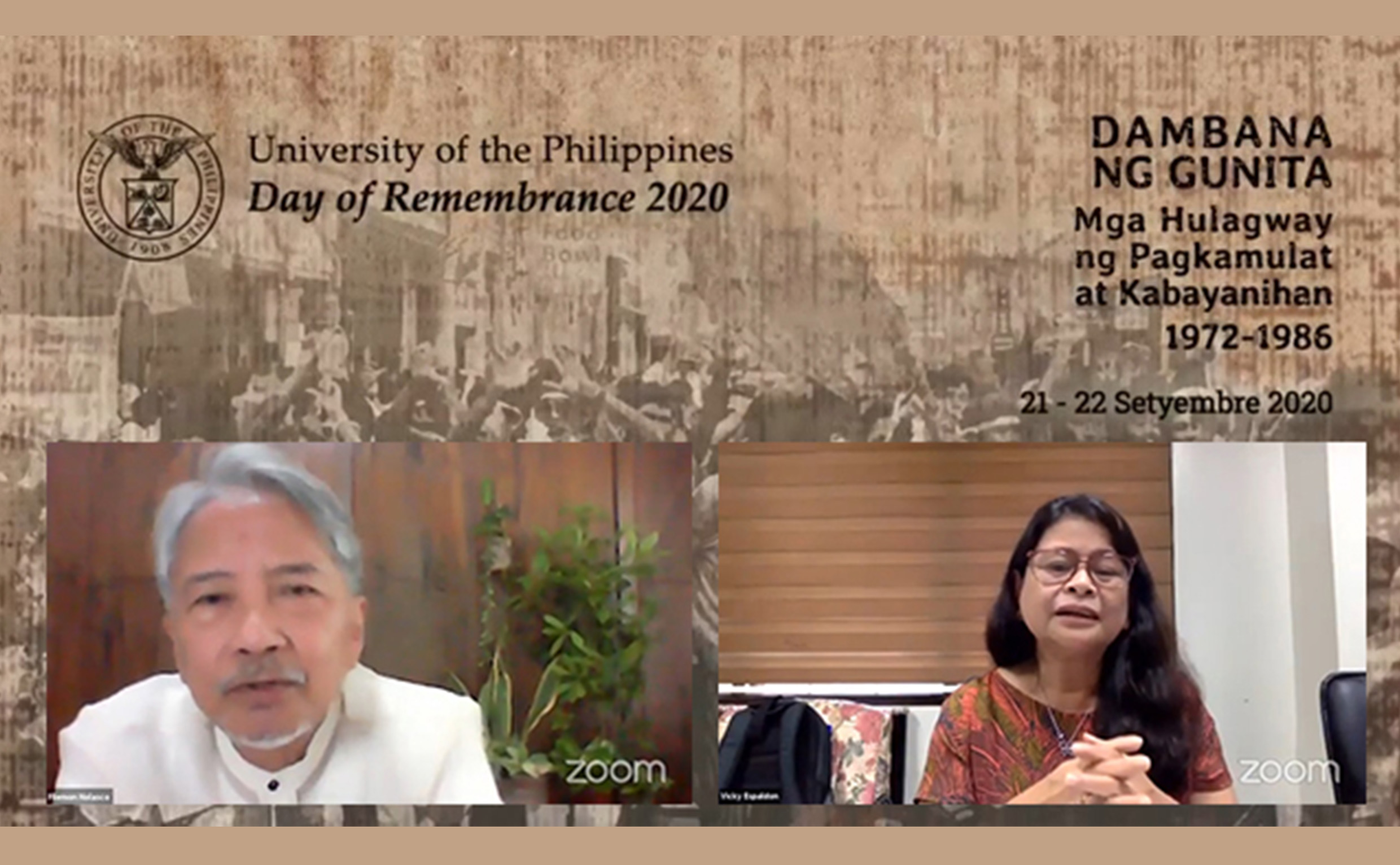 Two former student leaders of UPLB shared their first-hand experiences during Martial Law in the 2020 UP Day of Remembrance webinar series.

Atty. Filemon Nolasco, a Los Baños-based lawyer, talked about leading the University Student Council (USC) as its first president during the webinar’s Sept. 21 leg; while Dr. Ma. Victoria Espaldon, a professor of environmental science at UPLB and a former writer-editor of the UPLB Perspective, took part in the Sept. 22 session.

Atty. Nolasco’s talk centered on the experience of their group, called the ‘Southern Tagalog 10,’ which is composed of student leaders, faculty members, and activists from UPLB who were abducted and ‘disappeared’ in 1977 during the height of student movement in the campus.

Their ‘disappearance,’ he said, was worse than being arrested or killed because of its uncertainty. But despite the shocking and saddening nature of their disappearances, he said that they shouldered on and kept fighting for their rights.

He related how events culminating in a mass walkout to demand for the establishment of USC succeeded. He also identified the importance of culture in the activist movement, saying that music, plays, and short films proved to be instrumental in empowering and promoting activism.

For her part, Dr. Espaldon recounted that Perspective led the revival of the student press in the campus after the Aggie Green and Gold, the student newspaper of the then UP College of Agriculture, was forced to shut down following the declaration of Martial Law.

She said that campus papers were only allowed to operate again in 1974, when the Board of Regents made official the rules after much hounding from the students, but on a condition that the student papers will be overseen and the articles will be approved by an editorial advisory board and a faculty adviser, both appointed by the chancellor.

While censorship of student papers eventually ceased and financial resources somehow improved for the student paper, she said that Perspective still faced the challenge of spurring fellow students into active involvement regarding national and local issues.

This, she said, empowered the students to voice out their concerns and enabled dialogue between students and the administration. This initiative eventually gave birth to the College Editors Guild of the Philippines-Southern Tagalog Chapter, which remains active to this day.

Dr. Espaldon emphasized the importance of the free press in awakening the political consciousness of the students, faculty, and staff of UPLB.

Despite the People Power Revolution in 1986 that overthrew the Marcos regime, Atty. Nolasco noted that the struggle continues, expressing his pain regarding the 2016 burial of former President Ferdinand Marcos at the Libingan ng mga Bayani despite RA 10368 or the “Human Rights Victims Reparation and Recognition Act of 2013.”

But he remained optimistic that younger generations, such as his own children, would take up the struggle and continue the fight against dictatorship and tyranny.

Chancellor Fernando C. Sanchez Jr., who officially closed the Sept. 21 webinar, expressed hope that the participants would be inspired and empowered after hearing the personal experiences of the speakers.

He said that the webinar series would serve “to raise awareness in our youth, they who have never experienced and, with hope, will never experience the suffering inflicted by Martial Law.” (Albert Geoffred B. Peralta and Jessa Jael S. Arana)